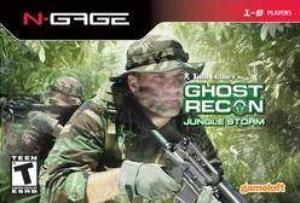 Havana, 2009: Castro's death leaves a power vacuum in Cuba, and a Colombian drug cartel wants it all. The island's first free elections are under threat until the U.S. sends in the Ghosts, an elite team of Army Green Berets, as part of a UN peacekeeping force to subdue the warlords and secure the elections. Bogota, a few months later: While the Cubans revel in their newfound democracy, the Colombian cartel has set its sights on a new target: home. Readying a retaliatory blow against its own American-allied government, the Columbian cartel rocks the capital with severe explosions, including one that all but demolishes the American embassy. The Columbian government calls for assistance, and this is where you come in. Restore order in the country and eliminate the warlords and their escalating terror activities. The next instalment in the enormously popular Ghost Recon series and the second Tom Clancy title for N-Gage, Tom Clancy's Ghost Recon - Jungle Storm comes packed with the intrigue, espionage, and ammo you've come to expect from this top-rated series.