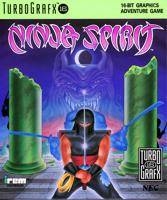 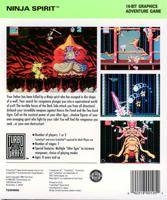 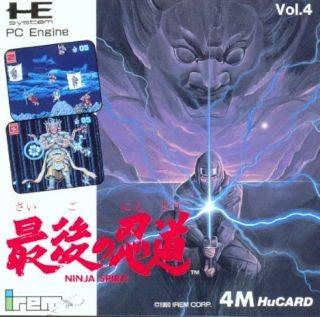 Ninja Spirit is a classic tale of murder, revenge, and kick butt ninja action!  Released as an arcade game in 1988, Ninja Spirit quickly grew to popularity and was ported to several consoles.  None of these became nearly as popular as the TurboGrafx-16 version, which is hailed amongst fans as one of the best games ever released on the system!  Now you can run, jump, hack, and slash with the absolute best classic ninja title on your Wii™ Virtual Console™!!

You play as Moonlight as he exacts his revenge for his father's murder on countless enemies.  Forge your way through 7 levels, each with a unique boss (sometimes filling the entire screen!)  Collect power-ups that allow you to project Ghost Ninja copies of yourself for up to triple firepower!! Ninja Spirit is unlike any ninja game you've ever played!  Instead of upgrading your weapons the game includes a katana, chain and sickle, throwing stars, and bombs from the very beginning.  Each weapon has its strengths and weaknesses, so choose wisely!

Unlike most games of this type, the controls are one of the best things about Ninja Spirit.  Moonlight can literally jump higher than the screen boundaries and use his weapons in any direction for a devestating array of attacks! To compliment this ingenious control scheme the makers have made sure that evil ninjas, flying wolves, bandits, and a plethora of awesome enemies are constantly pouring out of the woodwork at all times.  This makes for a challenging and totally intense action experience!!

When you throw a second player into the mix the game just gets better.  Alternate between players to go head to head with a friend and find out which of you is the superior ninja.  When you're done playing the TurboGrafx version you can switch over to Arcade mode for the real challenge.  In the Arcade mode there isn't a handy life meter anymore.  In fact, if you get hit by enemy fire even once, you're dead.  Gamers who can honestly say they've beaten Ninja Spirit in Arcade mode on one credit should be honored and respected by their peers!
If you want the most action-packed, nail-biting, vengeful, totally awesome ninja game on your Wii™ Virtual Console™, download Ninja Spirit today!
Hudson