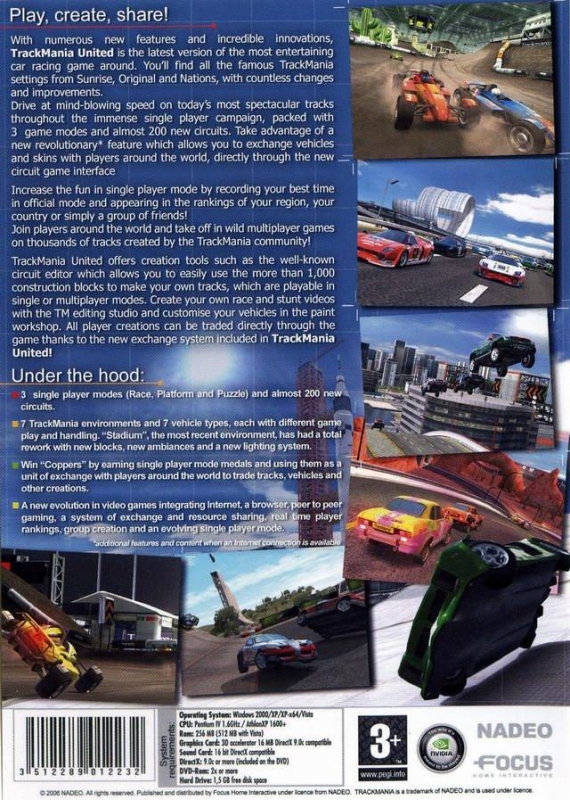 Trackmania represents a new game type. It was invented by Nadeo and it will mark the Videogames History forever. It’s a racing game, but it’s not about cars; it’s about tracks.

Game defies you to race several kinds of tracks with extreme shapes in four main game modes: “Race” (on circuits or courses), “Platform” (which challenges you to run extreme courses without falling), “Puzzle” (that allows you to build and modify a track to race it quickly) and ”Stunt” (a kind of “Tony Hawk” with cars). All, through a pure and opened gameplay which requires only four keys (the directions).

In Trackmania United you can play with 7 cars, each one with its own gameplay. You’ll be able to choose instable cars of Original, open driving cars of Sunrise and grip driving formula of Nations.

Excellent interaction between car and track, opened gameplay and great track shapes make each stage a different game, which can be incredibly challenging and fun.

There are 200 stages in this game and more than 200.000 to download (including stages of previous TM versions). This is possible due to Track Editor. It’s the best editor ever made, because it allows you to build everything that exists in the game! Then you can reproduce and improve existent tracks or build a completely new track. In lot of downloadable stages you will find genial courses that can surpass Nadeo’s high level.

Track Editor is not the only game’s editor. There are other editors like Replay Editor and Skin Editor. Game becomes very customizable, spurring your creativity.

The 7 environments in the game are composed of: 3 diversified locations around the globe (Desert, Snow and Rally), 3 beautiful landscapes of paradisiacal coast (Bay, Coast and Island) and the fantastic Stadium. The last one is extremely well designed and has a huge amount of blocks. These features allied to Stadium’s challenge spirit make this environment so extraordinary.

In this game, beautiful environments are accompanied by great graphics quality (What could be better?).Sounds are quite good but they are under level of remainder game. Music is well fitted.

The online interface is huge. There are many and great game modes. Coopers (TM currency that is obtained by different ways) will help you to explore Trackmania world. You can download thousands of tracks, hundreds of cars and skins, etc.

This game is masterful and it’s probably the best pc game ever made.