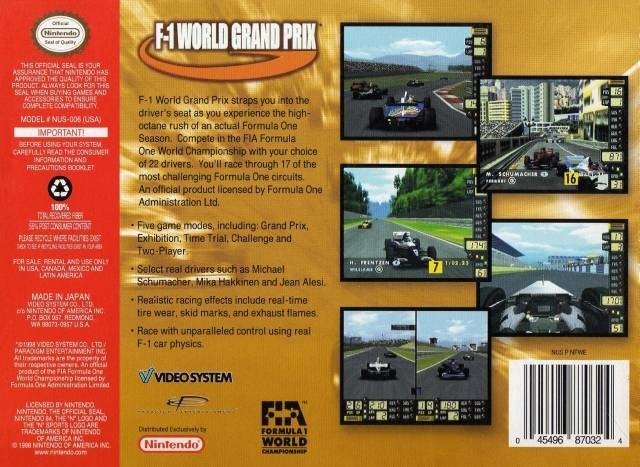 F1 World Grand Prix pushed the N64 to its early limits, featuring a completely accuracte recreation of the 1997 Formula One World Grand Prix season where Jacques Villeneurve triumphed so memorably.

Featuring all official 18 tracks from the Australian Grand Prix in Melbourne to the European Grand Prix in Jerez (and one bonus track) and all 11 teams from the 1998 season (from Ferrari to Minardi) the game was well received br critics, spawning a successful sequel.

From pit-stops to wheel losses, F1 World Grand Prix strived for complete realism, with the accurate fuel consumption system a particular highlight. Exclusive to the Nintendo 64, the game had brilliant graphics and sound, faithfully recreating the screeching tyres and roaring engines of those powerful Formula One cars.

A must-have purchase for Formula One addicts everywhere!