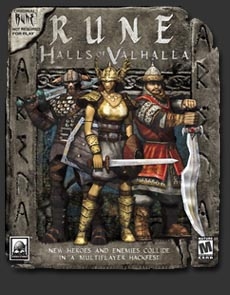 Two new modes (Headball and Arena) and additional maps, along with a multitude of new, animated creatures including three new fearsome female characters will keep the melee going. The Headball mode is a team based sports game in which players rend the limbs or heads of their enemies and score points by throwing them through a goal. It’s kill or be killed in the Arena mode as gamers compete in one-on-one duels against varying opponents. Similar to the original game, Rune: Halls of Valhalla will utilize an enhanced version of Epic Games' Unreal Tournamentä game engine and will feature amazingly life-like animations, a detailed weapon system and a unique combat system.