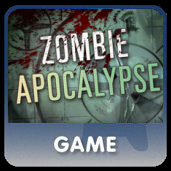 As the zombie infection spreads uncontrollably and the undead outnumber humans, a small band of heavily equipped gunslingers set out to destroy as many zombies as they can and try to save any of the remaining survivors.  Up to four players can try and stop the zombie apocalypse with an arsenal of deadly weapons, such as an assault rifle, flame thrower, grenade launcher, and when ammo is low a chainsaw will be your last line of defense against becoming one of the undead.