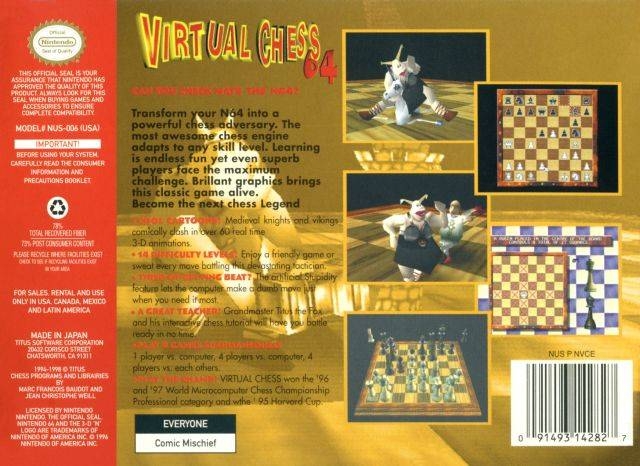 Titus has introduced the first chess simulation for the N64, Virtual Chess. Even with most of the options available to PC chess players, 14 skill levels to choose from, and animated fight scenes for the kiddies, the 3D view's lack of visual clarity makes for a frustrating game.

Virtual Chess offers most of the options computerized chess should. For the novice, there's a simple but thorough tutorial. Broken up into slim chapters, it's easy to use, whether you're just verifying the rules for taking pawns "en passant," or trying queenside castling for the first time. A save-game feature allows you to see just how stupid a move is before committing to it permanently. Unfortunately, there's no option to just retake the last move, so if you're hesitant, save early and save often. If you're still feeling squeamish, there's an onscreen CPU next-move suggestion button available at all times.

Play in Virtual Chess is plain hard to see. The pieces are difficult to tell apart from any angle, so you've got to be extra careful to avoid stupid mistakes (or be surprised when the enemy "king" easily avoids check by sliding across the entire board). To this end, plan on spending a lot of time rotating the board, which turns a full 360 degrees horizontally or vertically. If you were some kind of crazy nut, you could even attempt to play looking at the felt on the bottom of the board. Unfortunately, the board only spins on either axis in one direction, so if you miss your spot, you have to go all the way around again. Thankfully, a 2D version is also included, but that removes the whole point of the game: the fight animations.

The game would be better off without them anyway. Had they occurred on the regular playing screen, that would have been one thing. Such is not the case. Every time a piece is captured, all the pieces shoot into the air, the screen goes all crazy, and... the board appears again, with a cutscene featuring stylized representations of the capturing piece and its victim squared off to fight. The black knight is a battering ram, the white a unicorn. The black bishop is some sort of mosquito creature, the white a wizard. The black queen is overweight. Yawn. The animations are jerky and slow and lose their appeal after the third time or so. Thankfully, they may be turned off.

Ever since R2D2 and Chewbacca first played their first near-deadly game of holographic chess ("Let the wookie win"), it's seemed like a good idea to offer a chess simulation that comes equipped with 3D fighting sequences for the captures - and this did prove somewhat successful with Empire Interactive's Combat Chess for the PC. Unless the fighting actually occurs fully rendered using the same engine as the rest of the game, rather than as an annoyingly distracting cutscene, the novelty will always fade fast. Masters and novices alike will probably quickly strip Virtual Chess down to its clearer, more practical 2D mode after a minimum of laughs are achieved from the fights. Even in this mode, the game provides a great tool for fans of the "real thing" of any skill level.