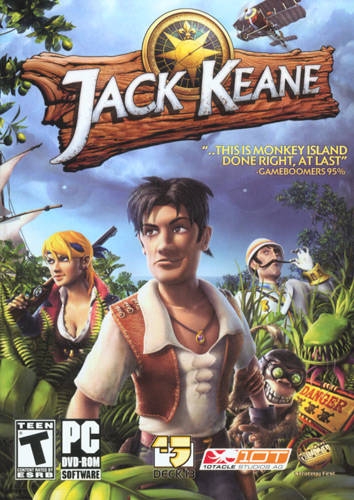 Jack Keane – The Seed of Evil

The game is set in the early stages of colonialism and takes place in diverse locations like London, Capetown or the Indian jungle.

Starting in London, Jack has to cope with cruel thugs who want to collect Jack's debt. Jack escapes and by chance receives a dangerous mission from the queen that leads him far into the Indian ocean. Soon, Jack meets a mysterious girl named Amanda, and together they embark upon a wild and adventurous quest on Tooth Island and eventually battle against the evil "Doctor T". Will they manage to foil his evil plans and finally save the world?

* Enthralling story including many allusions to famous movies and video games

* Suited for both genre beginners and, because of increasing difficulty levels, advanced players

* 3D levels presented with state of the art special effects Plenty of diverse locations such as London, Capetown and the Indian jungle