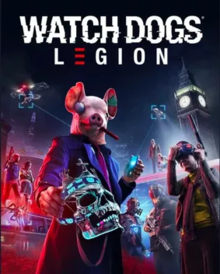 In the near future, London is facing its downfall: the people are being oppressed by an all-seeing surveillance state, private militaries control the streets, and a powerful crime syndicate is preying on the vulnerable. The fate of London lies with you, and your ability to recruit a resistance and fight back.

Legion delivers a never-before-seen gameplay innovation that allows you to recruit and play as anyone from the entire population of London. Anyone you see can join your resistance and has a unique backstory, personality, and skillset.

Unlock unique perks to personalize each member of your Legion according to your playstyle. Level-up each character within classes such as Hacker, Infiltrator, and Assault. Customize them further with unique outfits and iconic masks.