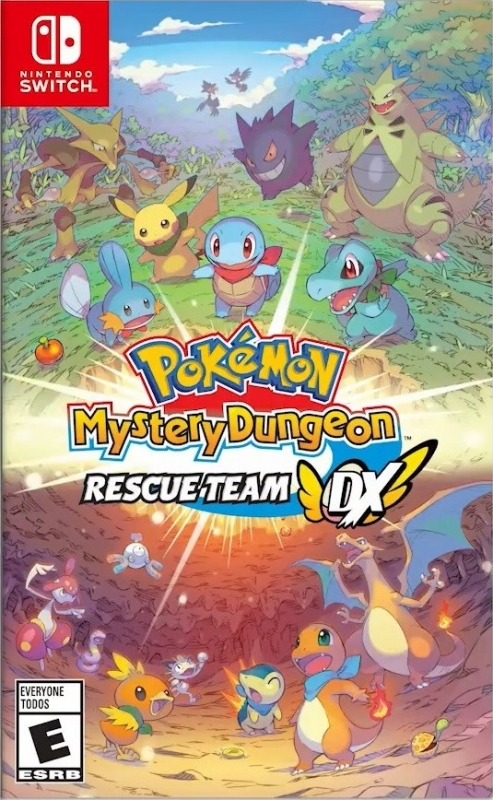 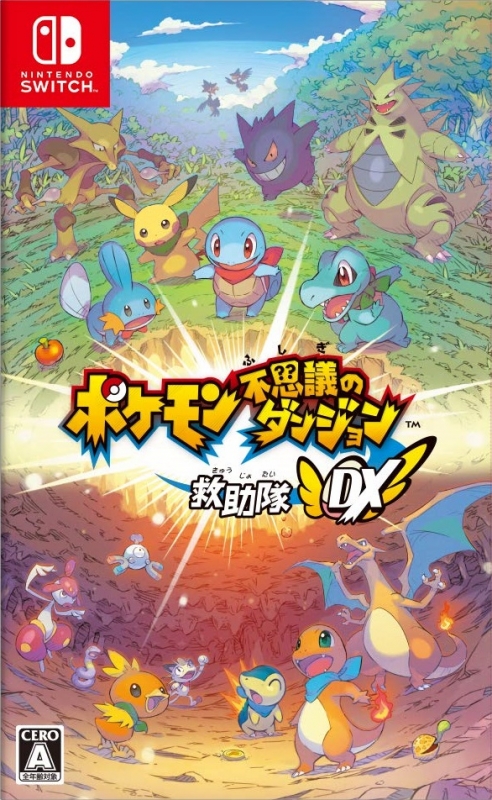 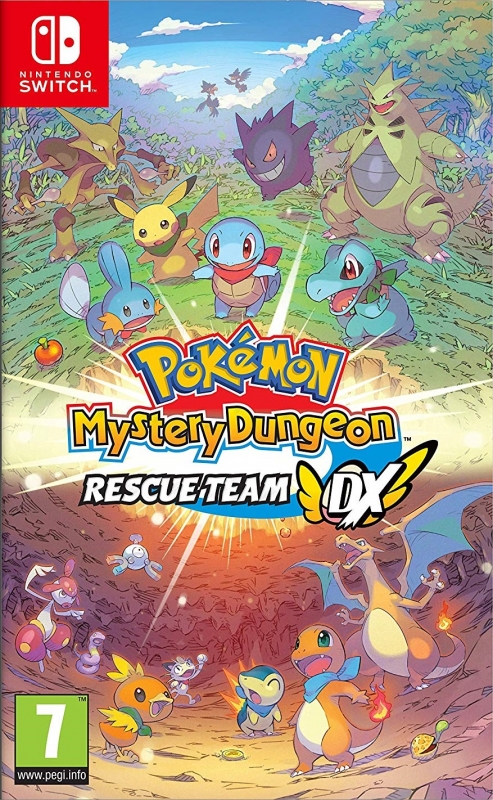 Can you rescue them all? 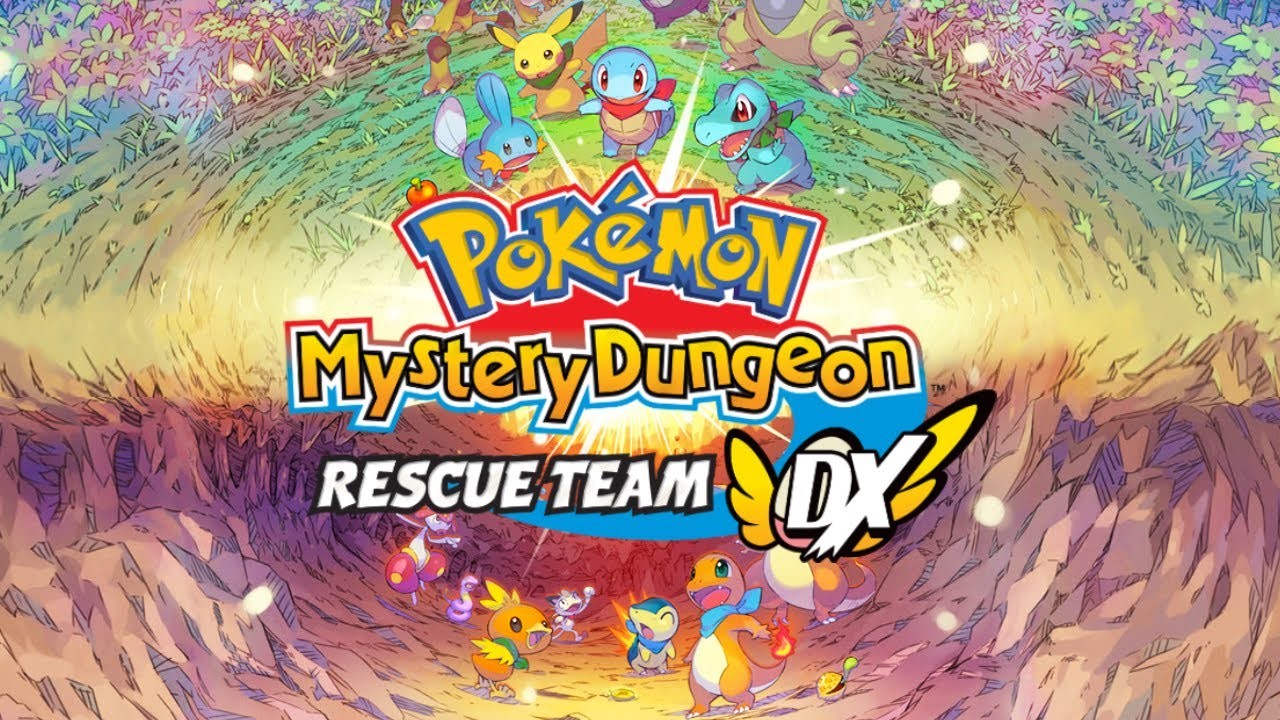 Before I start this review, a bit of disclosure. As of the time of this writing, I’ve been extremely disappointed and critical with the direction Game Freak, The Pokémon Co. and Nintendo have been taking the Pokémon series in general for the last couple of years. As such, while I’m going to bring my complaints of the main series to a minimum (and I mean it, I’ve stopped myself multiple times already from going on a diatribe about the series), I will mention it when I think it’s relevant for this game. Still, I feel it is worth putting my cards on the table before starting.

Pokémon Mystery Dungeon: Rescue Team DX is a mix between roguelike and dungeon crawler developed by Spike Chunsoft and released on the Nintendo Switch in 2020. The game puts you in the shoes of a human turned Pokémon under mysterious circumstances, forming a rescue dedicated to helping other pokémon in need. You then explore the different areas the game has to offer, each one divided into a certain number of levels, whose layout is randomly generated every time.

The game is remarkably straightforward. It has a very easy pick up and play nature to it, especially if you’ve played a Pokémon game before. The core of the game is divided into three parts: exploration, combat and resource management. Exploration consists of searching for the exit to the next level, special items and encounters and whatever goal your rescue mission established. It is simple enough, each level is made of interconnected rooms and corridors, so you will have to go moving through them until you find what you want. You have a minimap available that completes itself the more you advance through a level, which is very helpful, especially in the bigger floors, making sure you aren’t going around in circles. There’s also the random factor to take into account, since sometimes the ladder to the next level will appear right beside you, other times it will appear at the other side of the dungeon, and other times it will appear in the middle of a pokémon nest. There’s traps abound, which vary in their level of danger from annoying to run-breaking, mostly depending on the situation. An apple trap on a high level dungeon might help you find the food needed to continue, but it could also turn your only means of escape into an apple, and thus forcing you to try finish it to the end, find another escape orb or be defeating and lose all of your progress. There are ways to see the traps, but in general you are probably going blind, since most of the time they are hidden until activation.

Combat is also quite simple. Every dungeon will spawn a number of random pokémon, they will move around throughout the rooms and corridors, and if they see you, they’ll go after you. In general, they will go straight to you if they see you in a room, but in a corridor, they might turn elsewhere. Once they see you and they are close enough, they will attack you, and you will have to defend yourself. It follows a similar system than most pokémon games, with a couple of important changes. Status effects vary wildly, with paralysis being quite buffed (stopping the affected pokémon from moving a couple of turns) and poison very nerfed (it will lose HP after a couple of turns, and never enough damage to be worth it). The main problem with combat is that, after a while, it becomes very automatic, just make sure you have enough ranged attacks so the enemy cannot touch you, and you will win pretty much all the time, with attacks like heat wave or blizzard being utterly broken by affecting the entirety of the room without harming your team. And this ties into the next part, resource management. In theory, once you get into a dungeon, you can’t get out unless you finish the mission you chose, reach the end or use an escape orb. And this is easier said than done, since this game reworked some mechanics. In the original game, you had a basic physical and typeless attack that costed no PP, but that has been scrapped in the remake. Meaning that you will have to use your moves to make your way, spending your PPs and risking running out of moves to defend yourself. That, combined with the hunger meter (you will need to keep hunger in check by eating, otherwise you’ll lose health) means you need to keep an eye on your inventory more than in the original. It’s not a massive deal, since the developers compensated this by buffing the rate elixirs appear, and with a certain combination of abilities you’ll never ran out of PP, but it’s worth pointing out. Another thing you’ll have to check is the team abilities, which is an ability that a pokémon gets alongside the regular ability, and that affects the whole team, not just itself. This effectively replaces the IQ system from the old game, and it effectively incentivizes befriending as many pokémon on the dungeons as possible, to rack up those abilities, instead of just focusing on a single pokémon that can do everything. It’s very nice overall, but it could have done without the random element of the DX gummies, adding random abilities instead of having some priority.

This three elements are the basis of the game, and are the thing that will take most of your time. There have been complaints that this loop becomes repetitive after a while, which is a fair complaint. Longer dungeons are going to test your patience, period, especially once you’ve grinded a lot and the level difference makes most combat moot. The developers added an “auto-play” function, which is nice, I guess? It doesn’t really resolve the issue for those who get tired of the loop fast, and indeed it only really reinforces the fact the loop can be too repetitive. I don’t really see it as that repetitive, since enjoy the loop, but I won’t lie if I said the biggest dungeons aren’t a test of endurance.

Difficulty-wise, the game is a bit uneven, with the developers having dialed down the difficulty of the main story, and then left the post-game as it was, leading to a weird curve. First, the game will be too easy, especially for those who’ve played it already (and for the entire main story, the mini-map will show you where the enemies are, which is a huge mistake, deflates a lot of the challenge when you can just avoid most combat). Then the post-game difficulty will hit them hard, but not too much, since you’ll have access to evolutions. But once you catch up with the level of the remaining dungeons, it becomes easy again. Especially if you are going to get all of achievements, getting the Master Rank means so much grinding you’ll be near level 80, way ahead of even Mewtwo. After that, the game’s main challenges come from the dungeons that reverse your level to 1 and limit your items. Getting Mew is particularly aggravating, since it will appear randomly on a 99 level dungeon only on only a couple of very specific points, with very low appearing and catching rate. You better have all of the items that increase friendship and make sure your pokémon team doesn’t weaken Mew (only the leader can convince other pokémon to join), or else you’ll be grinding away until you have to leave due to the time limit. At least the level lets you preserve your level and items. Celebi and Jirachi limit your items and level, but at the very least once you reach the end of the dungeon, they join instantly.

The story is the same from the original game. You are a human appears in the Pokémon world transformed as a pokémon, some pokémon takes pity on you and become your friend, and then form a rescue team to help others. Then you go on many adventures and try to uncover the mystery of why you became a pokémon. As far as stories go, it’s simple, especially in the characterization, but the worldbuilding is pretty neat. The postgame mostly consists of getting the legendaries from Gen 1-3, which is not particularly difficult outside of the aforementioned mythical Mew, Celebi and Jirachi. You could try to get every single pokémon on your team, but that requires a lot of grinding, and it’s just not as methodical as the mainline games, since getting a pokémon to befriend you is a matter of chance.

And speaking of catching them all, Spike Chunsoft added more pokémon than what there were in the original. Specifically, they added the evolutions and pre-evolutions of those pokémon that got them after gen 3, plus updated the pokémon types. I’m really happy about this, since this actually expands the original game instead of limiting it of being a mere copycat. They also added mega evolutions, which I absolutely adore, the way the mega evolved pokémon work is neat, and it makes sense, a temporal boost that lasts a couple of levels or until you get certain status conditions adds a lot, especially when you have to find multiple megas at once. Though I was expecting an actual storyline to introduce it, it just appears. I would have loved to see the entire pokedex until now, but I also understand that Spike Chunsoft was probably working with a tight budget and/or schedule; otherwise, they would have probably made an entirely new entry. Then again that’s explains it but it doesn’t really justify it, since Nintendo is charging full price for it (and it’s considerably more expensive than the GBA/DS original) and it doesn’t feel like it added enough to justify the price increase. Z-Moves and Dinamax would’ve been nice too, but I imagine they would’ve been a nightmare to balance.

The multiplayer element of the game is pretty limited, basically consisting of being able to rescuing or getting rescued by other teams through either the internet or through passwords. This is cute if you need help and you don’t have at base a team strong enough to do the rescuing, but the best part is finding a mission generator online and farm deluxe missions. It takes a while, but after getting all of the dungeons, it’s the best way to get as many missions as possible in a single dungeon.

The presentation is quite good, although I’d be lying if I said I don’t miss the sprites. The 3D is really well done, and the aquarelle effect is pretty cute. Music is good as well, remastered versions of the GBA tunes, though they really ought to give you the option to choose the old soundtrack in this kind of remakes.

There is something very satisfying about this game, the look of exploring dungeons is quite rewarding, even if the content itself is not that deep. I imagine this could be use as a springboard for a new entry that expands in every single element, but as it is, it’s a great throwback. It was a good game back then and it’s still good now.