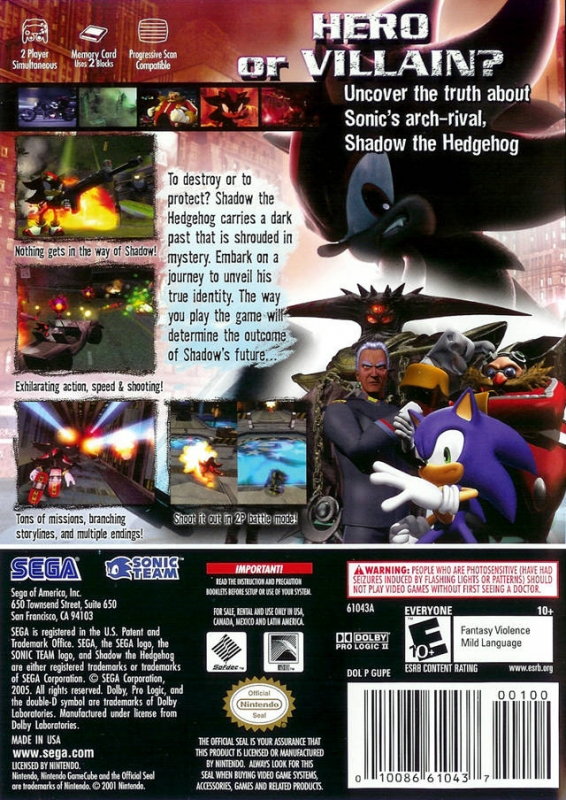 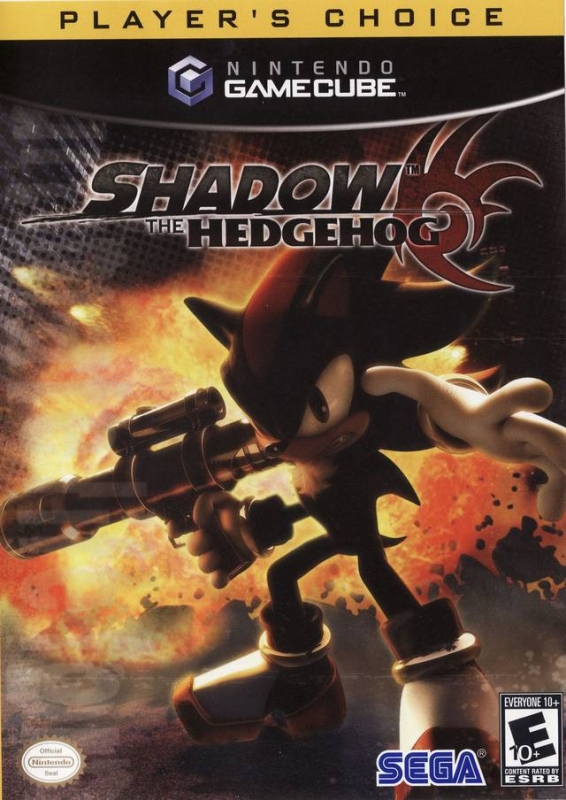 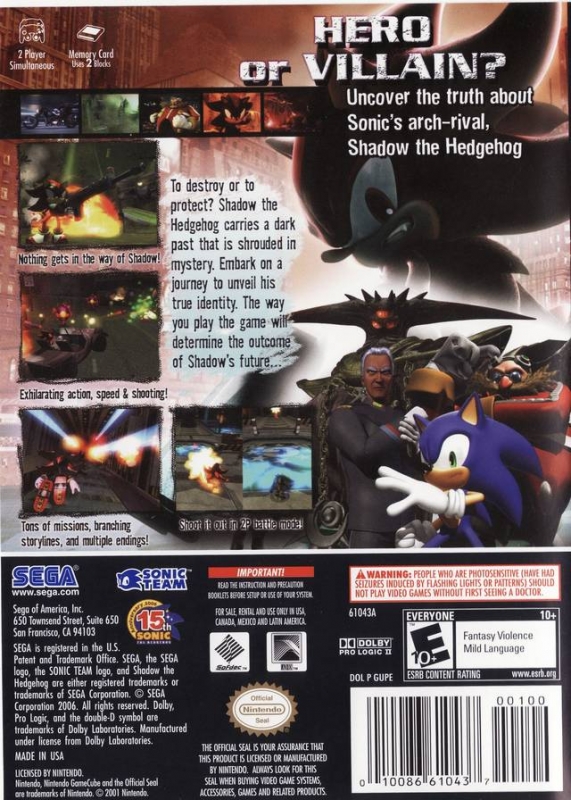 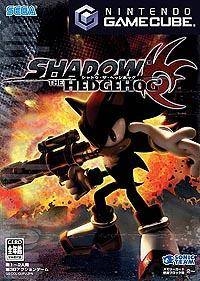 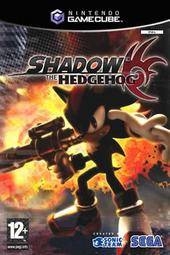 Shadow The Hedgehog overall brings a fun take to the series.

Presentation - 9.0
Gameplay - 9.0
Value - 9.0
While it lacks alot of serious polish, Shadow The Hedgehog is an extremely underrated game. Check out the full review. gh gh

Shadow The Hedgehog, Sonic The Hedgehog’s rival, had been a mystery since his debut in Sonic Adventure 2 for the SEGA DREAMCAST. After getting a positive reception as well as the game did, Shadow The Hedgehog reappeared in Sonic Heroes, Sonic Battle, and SEGA Superstars. Now, he’s back in his own game. Hero Or Villian? You decide. Great Game or Bad Game? You decide. And I decide that, by all means, this game is superb.

Created to be the World’s Ultimate Lifeform by Professor Gerald Robotnik, Shadow The Hedgehog was presumed dead after the events of Sonic Adventure 2. He reappeared in Sonic Heroes and Sonic Battle, this time with amnesia and with paranoia of questioning if he was the true Shadow or a copy. The game takes off from there, with the Planet being attacked by a group of extraterrestrial beings known as the Black Arms. Shadow is then confronted by the leader, Black Doom, who challenges Shadow into joining him for his memory. When it becomes clear that there are in fact others that may know the truth to Shadow’s past, Shadow must choose which path he wants to take into finding out who he really is.

And with the last bit, this game has unique branching storylines. Depending on what missions you complete, you will unlock several different endings. There is a single true ending to be unlocked, which happens with the completing of the rest. All sounds very cool and captivating, so let’s see how the game stacks up.

Whether you thought Shadow deserved his own game in the first place might have an effect on your enjoyment. And the fact is, he did deserve his own game. Shadow is the second most popular character in the Sonic Universe (the first is obviously Sonic), so why not give him a game of his own? He had a strong fanbase and had many mysteries to solved. Tails and Knuckles had their own games before. And many supporting characters of other franchises get their own games. So, in short, Shadow deserved his own game.

This game has an awesome looking boxart and a sufficiently informative instruction manual booklet. When you start the game up, you’ll see a cool intro with all havoc breaking loose, using the game’s main theme, “I Am (All Of Me)”. There is a scene where Sonic The Hedgehog falls at the hands of Shadow, something clearly made to build up suspense for the title, as something like that didn’t have much to do with the game’s main story. It was fun to watch.

The menu screens are a bit disappointing to me. I mean, they look cool, but did you see the end of the intro? I thought there would be a title screen like that and similar looking menu screens. Ah, well. And now to the game's story.

You’ll notice the graphics in this game as you play, and, if you played Sonic Heroes, you’ll notice how these graphics are almost exactly the same. The graphics of Sonic Heroes, though, were a bit disappointing and slightly lackluster, disappointing from how cutting edge Sonic’s SEGA DREAMCAST ventures were when they first came out. Shadow The Hedgehog uses the same graphics from its predecessor, and by now, they look even more lacking and very outdated. Passable, but could have A LOT better. The models for the G.U.N. troops are pretty cool though. The environments still look nice, although it would be nice if they were more colorful. Still, it matches with the game’s theme. The level design is pretty good, although it does lack a lot of polish, as Sonic Heroes did. And since this game is so similar to that, it lacks even more. There are some framerate dips here and there, but nothing annoying.

And there’s the gameplay, the main part of any game. As said before, they play exactly like any other Sonic game with a couple new, underappreciated elements. Along with the traditional speedy, spinning techniques of any other Sonic game, there are some weapons to be found, similar the shooting mechs from Sonic Adventure 1 and Sonic Adventure 2. Shadow will be able to use guns throughout the entire game. And these, are EXTREMELY underappreciated and met with unfair criticism. The gunplay was very fun to use. Some people argue the usage of guns relevance to Shadow being the “Ultimate Lifeform” and why he would even be using them. Making that criticism is unfair, because there many other characters in different Universes; comic books, TV shows, movies; that bear similar titles as Shadow’s “Ultimate Lifeform” and they use guns. Just because Shadow’s so powerful alone doesn’t mean he can’t use weapons. Weapons are a tool, and there DO help its users in many things. They are also very fun to use and they do make the game easier. While the game could have easily been done without them, it’s still an optional

Regardless of what you may think of weapons, they are mostly optional to use, although you might find yourself wanting to use them, which is all on you. Shadow can use guns, swords, and all sorts of weapons. There are also some vehicles in this game. Admittedly, they are usually pointless and noticeably slower than Shadow. They clearly just made for the looks. You will use the vehicles sometimes, and usually, it’s fun. Adding to the game’s new abilities are the Chaos techniques. The Chaos Control, a familiar maneuver, is a time warping speed boost activated by doing heroic deeds. The Chaos Blast, something completely new, is a 20-yard range explosion wave accomplished by doing darker deeds. Both are a lot of fun to use. Be cautious of using them though, depending on what missions are to be completed.

The controls and abilities are simple and reminiscent of 3D Sonic Games. You can use Spin Jump Attacks, Spin Jump Homing Dash Attacks, and use weapons and vehicles as already stated. However, the Spin Dash isn’t as good as it used to be, and you probably won’t be finding yourself using it as much as before. You cannot rapidly press it as you could do in previous mainstream Sonic games. In the 2D games, you would usually dash once at a time, and the game was set up so you would use it more. In 3D Sonic games, a rapid working dash technique is a MUST. The game still goes fast, but it would be very much appreciated if it had something like this. The LightSpeeDash, while better than how it was done in Heroes, still isn’t as good as it was in the Sonic Adventure games. As in Heroes, you will find yourself being sent off platforms if you plan on using a lot.

The boss battles can be both very easy and very challenging and are very fun to play. If you get all A Ranks in this game, you can unlock something special. While the prize isn’t as rewarding as it COULD have been, it can still be fun to unlock. There are plenty of levels in this game as well as many unique missions, adding to its replay value. These missions, though, can get frustrating and confusing, but overall fun to play. There are bunch of things to do in this game. There is also a multiplayer mode in this game, utilizing a battle system where you fight your opponent, using many different versions of Shadow The Hedgehog. This is a lot fun, especially when you have somebody else to play with. Speaking of playing with somebody, this game features cooperative play in the single player, which adds to fun.

This is not without its faults. Since the game is very similar to Sonic Heroes which was already lacking in polish for its time, this game lacks even more and slightly sloppily done. There could have been more work done on this game and it’s actually a tad bit disappointing. There’s some notable depths with the unlockables, but there just could have been more polish done in the game. Fortunately, there are little to any glitches.

And so, we have the game’s sound. As expected from Sonic game, we get great music, great sound effect, and a great soundtrack overall. There are a bunch of songs to hear, and they all sound nice. And then, there are the voice actors. This game uses different voice actors from 4Kids Entertainment and personally, I preferred the original voicecast way more. These voice actors are not as good, but they still are good enough. Jason Griffith’s voice acting as Sonic is what I usually the most, but in this game he sounded better in the later games. This is mainly because of how Sonic’s personality was to be in this game, to be perfectly honest. Jason Griffith also voices Shadow, and does a perfect job at it. The rest of the voice actors are mostly well done, but the originals were way better. It would also be appreciated if you could switch to the Japanese Voicecast in ALL versions of the game. Because what has happened lately, I want another English voicecast.

The script in this game was nice although characters will still say pointless things during stages. But that is still memorable here. Please note that what many people call swearing is just characters saying “Damn” and “Hell”. If they used ACTUAL cuss words, then they be going to too far. Fortunately, they didn’t. The game was also supposed to carry a “darker” theme to Sonic games, as you would expect from Shadow The Hedgehog getting his own game, and while the more playful themes of most of the Sonic games were a lot better, it’s still a fun way to view things. And really, the theme of this isn’t much different from other Sonic games. This game does feel very similar to Sonic Adventure 2 for its notable use of the base characters and concepts of the game, which is great, considering how awesome Sonic Adventure 2 was.

Overall, Shadow The Hedgehog is a very fun and underrated game to play. It lacks some serious polish, very serious polish, but if you can past that, then the game is a worthwhile experience.