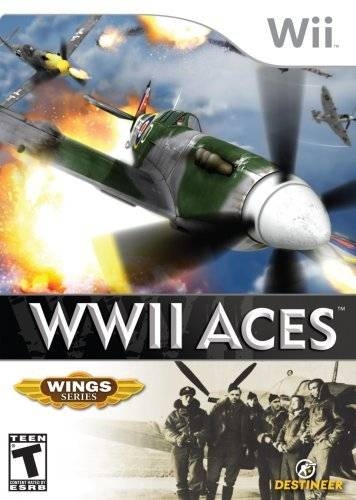 MINNEAPOLIS, MN, DEC 14, 2007 – Roll, loop, dodge and shoot like an Ace with simple motion controls in WWII Aces for the Wii™ system. Fly alone or with a friend via split-screen co-op as you join the ranks of the Royal Air Force, Soviet Air Force, or Luftwaffe and pilot 12 authentic airplanes through multiple campaigns based on real events. Or, take on your friend in thrilling competitive multiplayer! Published by Destineer and developed by Arcade Moon, World War II Aces immerses players in the intense dogfighting and acrobatic maneuvers that typified World War II via the most intuitive flight controls on the Wii yet. Execute barrel rolls, loops, and last-second dodges with a flick of the Wii Remote, or attach the Nunchuck addition for a more realistic control scheme.

Acrobatic Dogfighting: simple motion controls enable you to perform intense acrobatic flying that will have you rolling, looping, dodging, and shooting like an Ace! Unleash complex maneuvers like barrel rolls with a simple flick of the Wii Remote.
Thrilling Combat: Square off against dozens of enemy fighters at once, track your projectiles to their targets with Bomb and Missile Cam, and line up precision attacks in slow-motion “Bullet Time.”

Multiplayer: Fly with a partner in any mission in split-screen co-op mode. Or, go head-to-head in competitive split-screen multiplayer!

Real Planes: WWII Aces features the planes that turned the skies over Europe into a killing field. Get behind the guns of legendary planes such as the Spitfire, Ju-87 Stuka, Mosquito and He-11. Fly in the battles that shifted the balance of the war, including Dunkirk and the Battle of the Bulge!