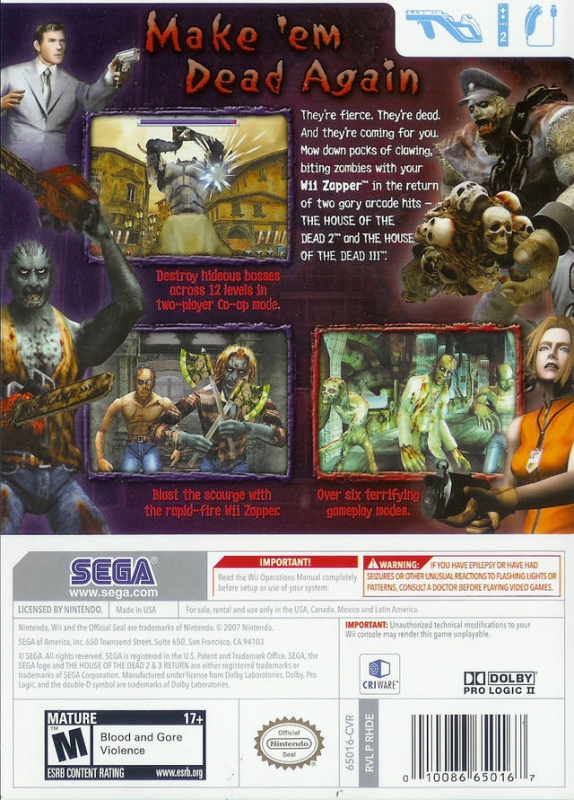 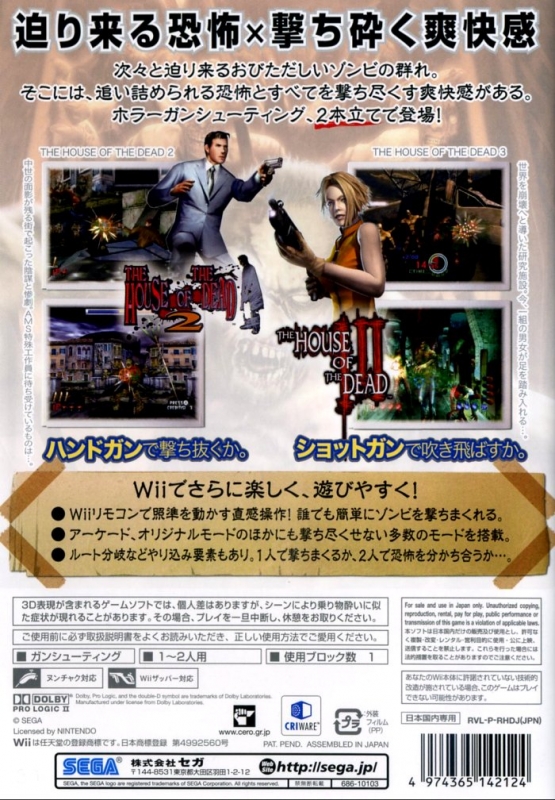 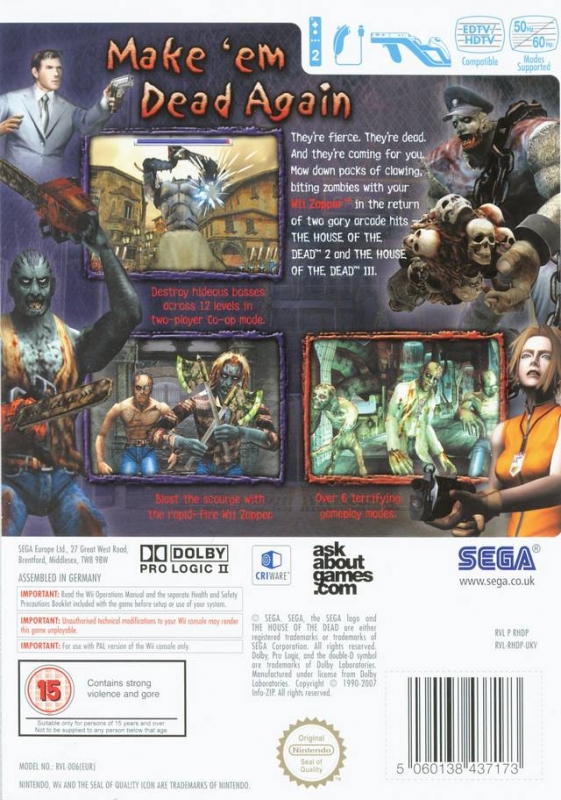 A double barrelled blast from the past

Presentation - 5.0
Gameplay - 9.0
Value - 6.0
Two zombie blasting classics packaged into one, does House of the Dead 2 & 3 Return still provide the fun the games did years ago or does it now suffer like G did?

Originally for the arcade, light-gun blasters HotD 2 and 3 have received various console ports over the years.  If you already have them this can probably be passed over, if you don’t own them already though you really are missing some great home-arcade action.


With both games being arcade ports there are a few downfalls of the arcade included.  The story for both games is incredibly weak, able to sum them up as ‘a madman has made monsters that you shoot’, the acting in cut scenes is poor and the length of the games is also very short, doable in 25 minutes or so each if you are slow to kill.  There is no saving by stages either, you play and complete the game or die and restart at the very beginning, receiving limited arcade style ‘credits’ in case your health points expire.

There is a notable style difference between the two games, HotD 2 requires more precision shots, where as HotD 3 requires you blast enemies more with less precision needed.  This is mainly due to the fact HotD 3 gives the player a shotgun as main weapon, and as such HotD 3 is significantly the easier of the two.

Before playing I was worried about the precision aiming issue, those familiar with a wiimote will have noticed the cursor it provides on screen in games is never quite where you are aiming, usually a good deal above or below depending where you placed your sensor bar.   HotD 2 + 3 Return totally removes this problem though.  Before you start playing you can go to a options screen and calibrate your wiimote aim, making it so the cursor is directly where the wiimote points.  They got it perfect.

Differences to the arcade versions are few, a cursor (various types you can choose) appears on screen to show your aim but for die-hard arcade fans you can turn this off completely if desired.  The reload has changed slightly also, where as on the arcade you was required to aim away from the screen and fire you now only need aim away from the screen and it will reload itself, it makes the games flow slightly more fluid but barely any difference.  Visually the game is very dated but fortunately the fast pace arcade nature of the game means that this doesn’t matter so much and fails to detract from the gameplay.


For replay value there isn’t much.  The main game of each offer various routes,  in HotD 2 shooting keys you see about the levels or saving civilians can alter your route while in HotD 3 you choose which area of the game you play through in order of preference, depending which you pick you either make your way through the area forwards or backwards.  HotD 2 has more variety of areas due to this, though still very limited.

Additional replay values include ‘original mode’ for HotD 2, which is the exact same as the arcade mode only you can shoot items for use to boost further playthroughs, things like no reloading, rapid fire, new costumes for the brief cut scenes and similar.  HotD 3 has an ‘extreme mode’ with tougher enemies though it is still basically the exact same as arcade mode in terms of what you can do.  There are also boss fight only modes and a couple others that still bring nothing actually new, just replaying the existing game again.

HotD 2+3 Return is a cash in but if you haven’t owned these games previously then the cheap released price means it is a must buy.  You won’t be sitting playing the game hours on end but you’ll find yourself with 2 games you can pick up and play for some mindless fun, especially if you have a friend with you for 2 player action, or two be really flash you can pick up a wiimote in each hand and blast the screen tombraider style.