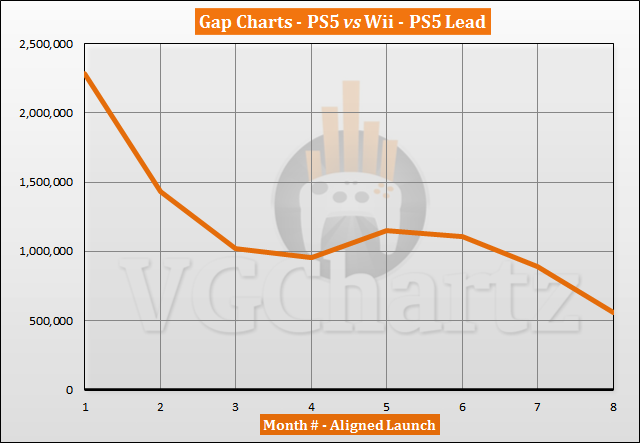 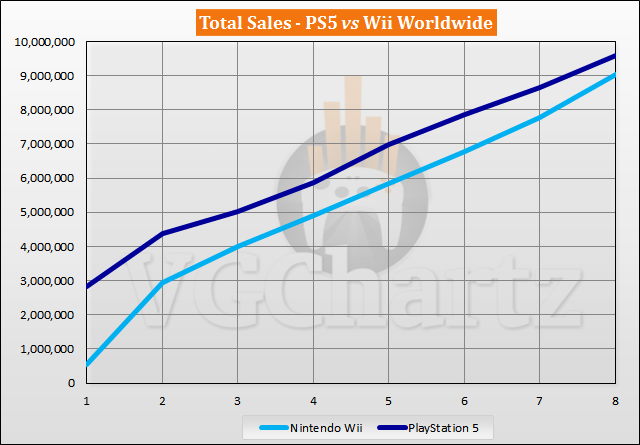 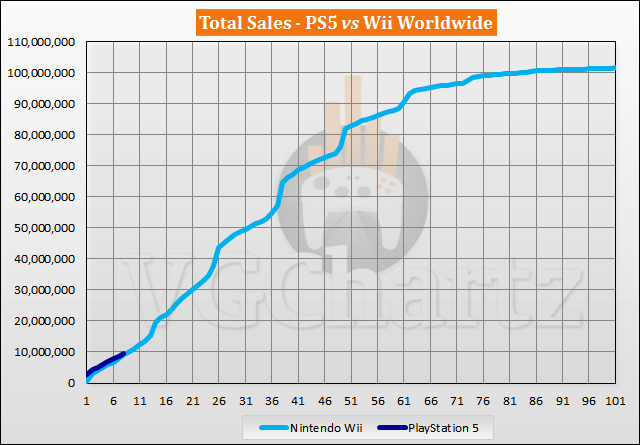 The Nintendo Wii did not reach current PlayStation 5 sales until month nine where it had sold 10.17 million units.

I have to thank multiple people for suggesting this sales comparison. The Wii is one of the fastest-selling consoles in history, so it will be cool to see how well the PS5 can keep up with it over the next few years.

Thanks for listening to suggestions! I'd love to see PS5 vs PS2 but since monthly PS2 sales aren't available, PS5 vs DS would be the next closest comparison to the best selling console of all time.

We have every ship. quarter, but the PS2 is an annoying curve versus every others, it is very slow and endless.

True, he could do a quarterly comparison but that would only be shipments. I still think PS5 vs DS would be very interesting to follow, especially once the Lite comes into play.

PS5 is going to be miles ahead of PS2 for a long time. The PS2 had some insane legs. Its sales weren't anywhere near PS5 at launch.

Good point. Pretty sure the same applies to the DS until the Lite releases.

Even the Switch was ahead of the DS at first.

Yup but almost nothing can keep pace with DS once the Lite kicks in.

Thank you so much for adding this sales comparison! I very appreciate it ^^

A good comparison for speed selling, will be a good watch. Thank you.

it's impressive how Wii sales just stoped at some point. The thing holds amazing numbers, unmatched at the time, but then it just "dies" and stop selling.

I imagine with supply constraints and the insane momentum of the Wii, the PS5 will inevitably fall behind it soon enough but I also imagine its curve wont flatten like the Wii’s

The ps5 isn't in poor supply it is just lower than the demand. Demand at this point is completely unprecedented. Without a disaster there is never going to be a dip in ps5 sales in the next few years.

While I don't think the PS5 is touching the DS or PS2 (and won't outsell the Switch either), I expect it to outsell the Wii in the long term. Wii took a hit in 2010 and then fell from there.

Although, I’d have aligned the sales to the worldwide launch rather than the US launch that came out a month earlier, because now the Wii won’t pass PS5 until a month after it really did. :D

There is justification, aligning the launches comes closest to the worldwide launch.