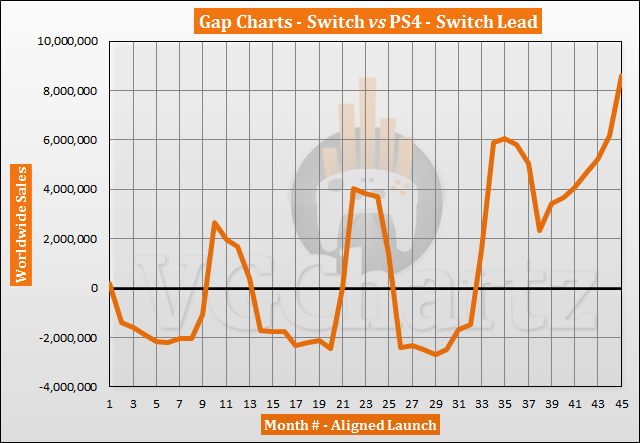 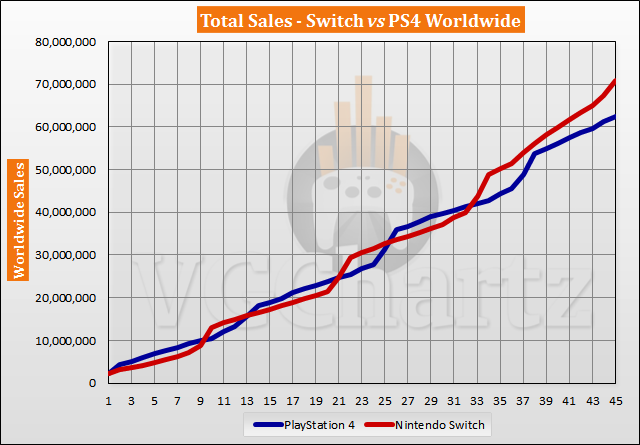 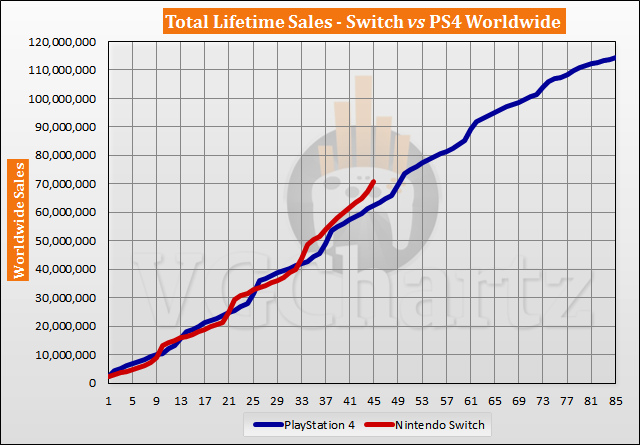 I'd be very surprised if a recross would occur anytime.

After December it'll be 10 million

As long as Nintendo doesn't ruin the momentum, the Switch should comfortably keep the lead until the end of its lifecycle.

The PS4 sold about 3.7 million in the months 46-48. That will compare with december, january and february for the switch. Last holiday the switch sold 7.7 million during those months. so we are looking at around a 12.5 million lead for the switch after 48 months.

@DaAndy I agree, it could very likely be higher than 12.5, When estimating I prefer the lower bound number as it is always nice to exceed expectations. It is impossible to predict, but for the fun of it, I think that in february we will see this chart with the NS being 13.5 million units ahead. I guess we will soon be able to know.

Switch should have a lead comfortable enough to remain on top. Next year should be well over 20 millions as well. I feel like Switch still has bright years ahead of it. I hear around me more and more people wanting to buy it, which is something that calms down a little once you are close to the 80 millions units.

Its over ps4, I have the high ground!

Its over ps4, I have the high ground!

Sony PS4 ... The glorious old champion. The mighty Nintendo Switch will win this battle over the PS4. Sony PS5 will finish this war.

@AFattyGamer I can tell you are a big fan of Playstation, and I actually wouldn't mind if you are right and the PS5 ends up being an amazing console seller. I also hope Xbox is able to sell as much as possible. The more every console sells the better. If you are right, then we will have a lot of fun seeing all these wonderful articles by Trunks for many years to come.

@dmillos Thank you friend :). And yes I love Sony and PlayStation. I game on all 3 of the great powers; Nintendo, Sony and Microsoft. Sony and Nintendo are almost equal for me. Nintendo Switch gives me awesome exclusives on a TV & handheld experience. Sony PS5 gives me exclusives of high caliber ambition. Microsoft is alright to me, they keep Sony level headed so I thank Microsoft for that. Hoping for a healthy 9th gen from all these consoles and VGChartz can keep the sales articles pumping :')