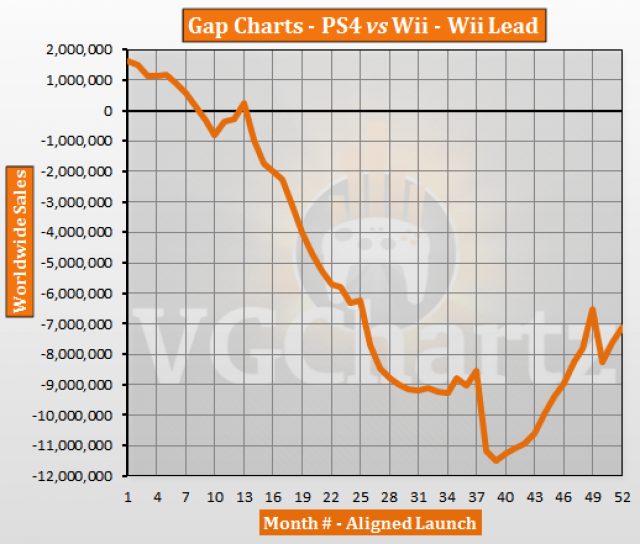 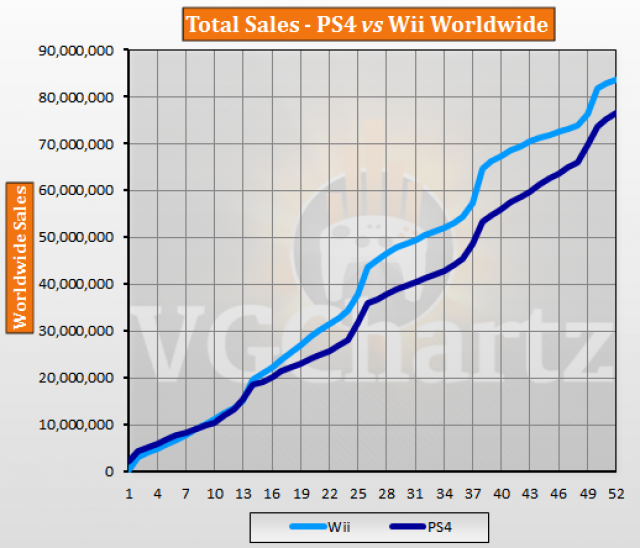 February 2018 is the 52nd month that the PlayStation 4 has been available for. During the latest month the gap grew in favor of the PS4 when compared with the Wii. The gap decreased by 507,767 units in the last month and by 4.14 million units. The Wii currently leads by 7.12 million units.

I would say by the end of that year.

I say by the end of this year. I predict a permanent price drop announcement at E3.

Well, watch out Wii. If it's true there will be no sign of PS5 until 2020 then the PS4 will take the lead by 2019. God of War, Death Stranding, Last of Us, Red Dead Redemption, SpiderMan, Kingdom Hearts, and probably some more.

The PS4 won't make it. The last Japanese charts shows that this is the begining of the end. Only during big release it can pop up again for 2 weeks but from now, the PS4+PS4 pro will be sub 15000 in Japan and under the NS in global.

Good thing PS4 has a bunch of big releases this year then :).

Wow there are still people that think PS4 won't pass Wii? Incredible. 25m sales to go, it's a certainty. Wtf kind of sales do you expect in 2019 for it not to happen.

Just because Japan's love affair with portable gaming has taken root again doesn't mean the rest of the world has followed suit. PS4 still has a number of big titles coming out, and the console is likely going to receive one final price cut before a PS5 release (which is rumored to be no earlier than two and a half years from now).

Sales slump in japan doesn't mean much for the PS4 imo, as it has always sold way less in Japan compared to Europe and the US. PS4 is dominant in Europe to the point no other console is able to challenge it - I think we will only ever see the beginning of the end when european sales decrease significantly - but that's unlikely to happen anytime soon.

Believe me, even in 3 years, I will dig far enough to show you this discussion if you were wrong...

At this point the Wii was outpacing the PS2, so is the PS4. In fact, the PS4 will probably beat both the Wii and PS2 to 100 million units. I don't think it will outsell the PS2 overall though.

At this point the Wii was outpacing the PS2, so is the PS4. In fact, the PS4 will probably beat both the Wii and PS2 to 100 million units. I don't think it will outsell the PS2 overall though.

The fad numbers are hard to top, something even Switch is struggling to keep up with. The important number is the gap change over the past twelve months- over 4 million in PS4's favor. This is the Wii sales slump everyone was referring to a few years ago, and based on these numbers we can expect PS4 to top out the Wii before the generation is over.