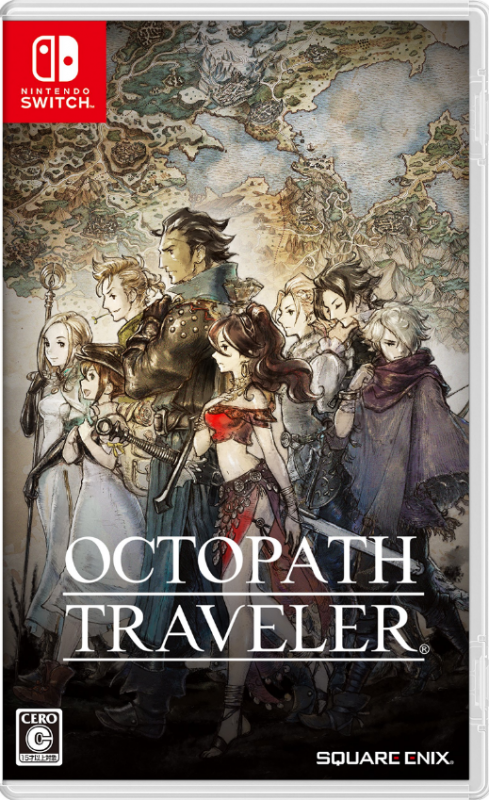 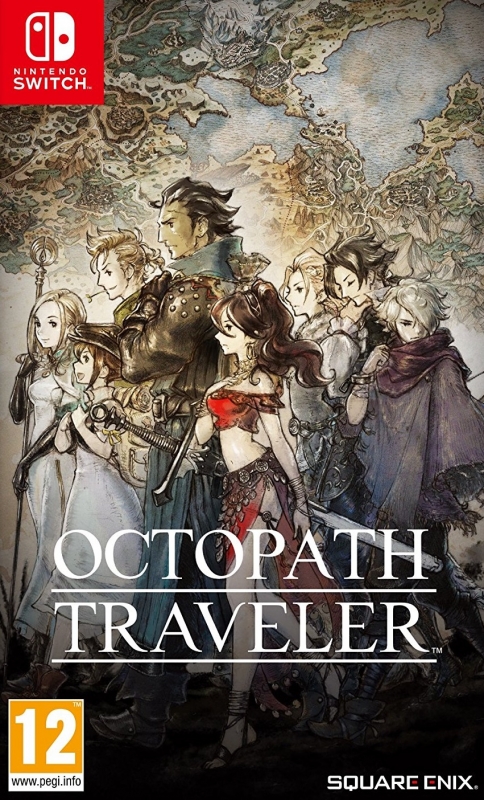 Not all paths are created equal

Presentation - 9.0
Gameplay - 8.0
Value - 9.0
Octopath Traveler takes the classic JRPG formula and tries to go a different path with it. This results in a very good game that is beautiful in its own little way but not without issues.

Long was the wait for this Switch exclusive JRPG. It got announced at the first Switch presentation on January 13th 2017 but it would take more than one and a half year to finally release.

Right from the start the game sets itself apart just by aesthetics. Using sprites and textures akin to games of the 16-bit era combined with a polygonal environment and modern effects creates a unique style that is just gorgeous to look at. As the name implies the game contains eight different characters following their own stories while traversing the same world and you get to choose with which of those characters you want to start your journey. Then you experience the first of four chapters of this characters story, get used to the special ability the person has and encounter first enemies as well as the first boss. Once that is down you are set on your journey with a waypoint and a level recommendation for chapter two and you will soon realize that areas further away from the center of the map have higher tiers of difficulty so the intended way is to travel in the innermost circle, fighting, leveling up and visiting the other towns. There you will meet the other characters and can join them in their first chapter and they get added to your team afterwards. Then you can continue your journey, experiencing the world of Osterra.

While it is nice that each character starts his journey with his/her own motives and quests it quickly gets apparent that the structure of the chapters is always the same.
Arriving -> Talking to certain story NPC -> doing special ability -> visit dungeon -> beat boss -> another round of talking

Almost every chapter follows this cycle. Some of them remove the part of the special ability. While the stories told are interesting the repeating gameplay structure hurts them after a number of finished chapters.

I had a similar situation with the environmental effects of the game. While it looks good and makes for a very beautiful setting it sometimes devolves into “Can’t see s***!” because of too much light and bloom effect in some scenes.

Meanwhile the music and sound design is in my opinion the most outstanding part of the game. The orchestrated soundtrack is great, fits to each town/place you currently are and is something that really keeps you in some places just to listen to the music. The sound effects do a very good job to give more weight to scenes and fights as the characters start screaming when using a higher boost and some gasps and reactions are neat for the story conversations. The only music that gets stale after a point is the regular fighting theme which plays way too often. A few more tracks there would have been nice.

I am torn whether I want more voice acting in the game or less because only certain parts are fully voiced. Most of the time you only get single words. But the tone of the voices at least fits the characters.

Coming to the gameplay it has what you can expect from something going back to the classical JRPG roots. Turn-based combat with items, magic, special abilities. The boost system that powers up your attacks or abilities is a great addition in combination with the weakness system that gives enemies a shield that has to be broken with a certain weapons or specific kinds of magic. Once broken it stuns the opponent and you can unleash all your damage while his guard is down. Surprisingly this system has really grown on me and even while grinding for the endgame content was fun to use and abuse. Especially the boost system which has great effects and sound and makes attacks just feel so much more powerful. Keeping tradition of JRPGs Octopath also has its fair share of random encounters. And the encounter rate is pretty high. But it only bothered me when I was trying to finish chapter 4 of my remaining characters and was already pretty over leveled with my main party. While exploring I didn’t mind the fights because I felt I progressed at a solid rate to get to the next chapters. Still some people with less patience will be annoyed about them. While there is an ability early on that halves the encounter rate it also causes you to miss out on XP and money which will make progress much harder.

Last but not least the story and the world. I was surprised by the amount of world building that Octopath Traveler has. You can’t interact with each NPC you encounter but those who are intractable talk about their own fates and once you use the “Inquire/Scrutinize”  action you get a flavor text about the person which leads to the world feeling much more alive and complex. Also the side quests while varying in quality have some very interesting and ongoing storylines in store. Some of them are even required to get to the final ending. This final ending attempts to combine the very different story path of the characters and gives them a common goal to have one final journey. While it is not the best story ever there were a lot of details, hints foreshadowing, which I really liked. In a similar way the story paths of the main characters vary in quality. Some get really interesting and also dark, while others feel a bit forced and use some deus ex machina to progress. But telling a story in only 4 chapters is pretty challenging so I am more bothered by the gameplay similarities of each chapter than the stories themselves.

In my run of Octopath Traveler I started with Therion and finished each chapter of each character in around 50 hours. I completed each sidequest expect for the last one that leads to the final bossrush, which is very frustrating and hard, despite grinding levels beforehand for 15 hours.
My savegame is now at 78 hours, had multiple game overs, each party member is at least lvl 75 and I am most certainly now done with Octopath Traveler as currently there won’t be any DLC for it.

I really enjoyed this game. It is a beautiful homage and reimagining of a classical JRPG. But it’s not a perfect game by any means. As stated some parts of the game need a bit more variety. Random encounters are something that can make you hate this game. But if you don’t mind a very similar flow of gameplay and a lot of fights with mostly the same track you can dive into a beautiful and surprisingly detailed world and get lost in it for tenths of hours.