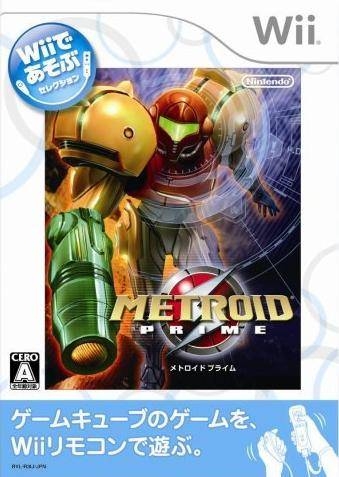 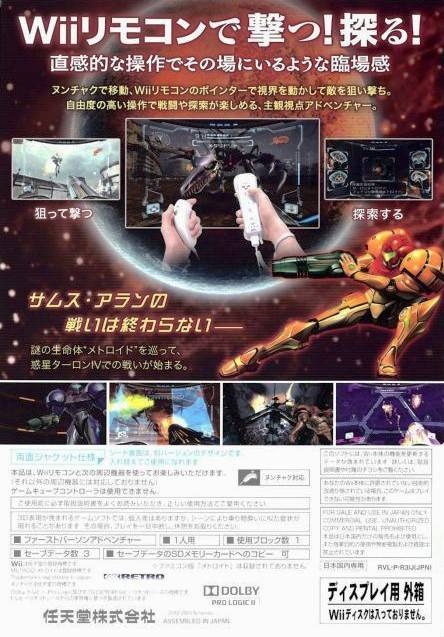 Unlock Art Gallery 1
Scan 50% of the logs in the game to unlock the first Art Gallery.

Unlock Art Gallery 2
Scan 100% of the logs to unlock the second Art Gallery.

Unlock Art Gallery 4
Collect all the items in the game.

Play Original NES Metroid on GameCube via Link Cable
To make this work, you will need a copy of Metroid Fusion for GBA and a copy of Metroid Prime for GCN. Once you have beaten Metroid Fusion, connect the GBA (with the Fusion cartrdige in it) to the Cube via the Game Boy Advance link cable. You will now be able to play NES Metroid... and save on the Cube Memory Card.

To unlock the Metroid Fusion Suit, do the exact same thing only dont beat fusion, but beat prime.

Idle Animation
Leave the controller for a while and Samus will relax and open the flap on her Power Blaster to fiddle with the controls.

Unlimited healt
While playing the game on any level, press L,R,L,R,L,B,Y,Z

Fire missiles faster
With the first gun equipped, rapidly press Y + A. As soon as the missile fires, the gun will switch back to beam weapon mode, but when you press Y again, it fires another missile. This can take down enemies in a shorter time, preventing them from having more attacks on you.

Heat wave
Shoot any beam weapon repeatedly for about thirty seconds. When you stop, a heat wave can be seen in front of the arm cannon.

Phazon Suit
To acquire the Phazon Suit, you must defeat the Omega Pirate. The Phazon Suit makes you immune to most forms of Phazon radiation. It also comes equipped with the Phazon Beam, which can only be activated during the last Boss fight.

Kill birds in Chozo Ruins
When you enter the Chozo Ruins, aim your gun skywards. You will see birds flying. Shoot the birds and they will explode, with feathers all over the place.

Kill Elite Pirates
When the Elite Pirates burst out of containment, switch to your normal beam and build up a charge shot. When the Elite is not trying to absorb energy, fire a Super Missile at them. Two Super Missiles will take them down. Use the following tactics to defeat the different kinds of Elite Pirates at the Phazon Mines. This is a very difficult area due to switching beams for certain pirates:

Power Troopers
Use Normal Beams or charge a Normal Beam at it three to four times.

Wave Troopers
Use Wave Beams or charge a Wave Beam at it (two to four times).

Ice Troopers
Use Ice Beams or charge an Ice Beam at it and finish it with one missile.

Shadow Pirates
Use the Thermal Visor to see them. Use Wave Beams or charge a Wave Beam at it at full force (two to four times); or, fire with ease with the Plasma Beam.

Classic Metroid game:
Note: This trick requires Metroid Fusion, a Game Boy Advance, and a link cable. Successfully complete Metroid Fusion and save the game. Connect both games with the link cable to unlock the classic NES version of Metroid.

Plasma Troopers
Fire at them with your Plasma Beam three or four times. Hide behind a wall and the Plasma Beam will end up finishing them with its burning effect. Do this to other pirates as well, even though they only need about three shots to be killed, only about one will evaporate them if you just wait patiently.

Full map of Tallon IV:
Successfully complete the game under the hard difficulty setting to unlock Image Gallery 3. When this gallery is opened, there will be a map of the entire game, indicating where everything and everyone is. The left side of the map will have a legend on it.

Easy Metroid Prime (Core) battle
Near the point at which you start is something resembling a twig embedded into the ground. While standing on top of this twig, you are completely immune to Metroid Prime's shockwave, it's only (common) attack. The only things that can hurt you are the short range lunge attack and spawned Metroids, which fall easily anyway. Curiously, while standing here, Metroid Prime will not change emission spectra without laying a pool of Phazon, which helps the fight along considerably.

Meta Ridley Quick Air Form
This trick makes Ridley much shorter. While in his air form, wait until he flies above you and crashes down on you. Before he flies back up, hit him with the boost ball. If done correctly, he will lose his wings and the ground form will begin.
Back to Cheats