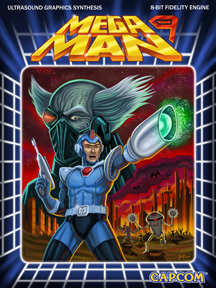 Like previous Mega Man games, Mega Man 9 features several weapons gained through the defeat of the bosses in the game. Besides serving the purpose of bringing down specific bosses weak to that weapon, they also have secondary and secret uses that make getting through the game easier.

The Mega Buster and the Proto Buster are the default weapons for Megaman and Protoman respectively. It is a weak weapon with indefinite ammo that can rapid fire in the direction the player is facing. This time around, only Protoman can charge his buster by holding the button down to unleash a powerful shot.

This isn't a traditional weapon so much as a perk for using Protoman. You can't "equip" or "summon" it from the weapon menu. Protoman wields it while jumping and it reflects projectiles back to their source.

Summons Rush ahead of you. Jumping on his back will trigger a spring that shoots you higher into the air than a normal jump. This can also be used to avoid spikes and other damage zones. The Rush Coil and Proto Coil serve the exact same purpose.

Summons rush. Jumping on his back let's you fly forward as your weapon energy slowly depletes. The Rush Jet and Proto Jet are exactly the same.

The Magma Bazooka shoots three flaming projectiles when used, sending one forward and the other two north and south at 45 degree angles. Holding the button down allows you to charge the weapon for a larger, more powerful shot at the cost of more weapon energy. It's the only chargeable sub weapon in the game.

Hornet Chaser releases a large hornet that homes in on enemies. It is destroyed on contact. As a secondary use, it can also obtain power ups (except for E and M tanks) on the screen and bring them back to you.

Concrete Shot shoots a glob of concrete at a curving angle ahead of you. When it touches a wall or floor, it turns into a solid block for a few seconds that can be stepped on. In terms of raw power it is the strongest weapon in the game.

Misc.
- Can freeze lava pillars into solid concrete
- Small enemies can be killed in one shot and turned into blocks
- Can eliminate Galaxy Man's Black Hole attack

Black Hole Bomb releases a slow, concentrated ball of energy that can be controlled by moving it up or down. Pressing the attack button again detonates it into a black hole that damages or sucks in enemies to their doom.

Tornado Blow is a full screen attack that damages enemies or blows them away completely with green twisters. Its secondary feature is that it lets you jump higher while the twisters are still in effect, and can be used as a "high jump."

Laser Trident shoots a quick trident in the direction Mega Man faces. The trident has piercing capabilities, so it can pass through walls and enemies, as well as their shields or any defense they have up.

Jewel Satellite creates a shield of four jewels that surrounds and protects Mega Man. It can be hurled forward by pressing the attack button again. It also has the ability to reflect most projectiles back at their source.

Misc.
- Perfect protection against enemies that jump out of pits

Plug Ball drops a pink ball of electricity to rides along the ground, walls and ceiling until it comes into contact with an enemy or disappears.