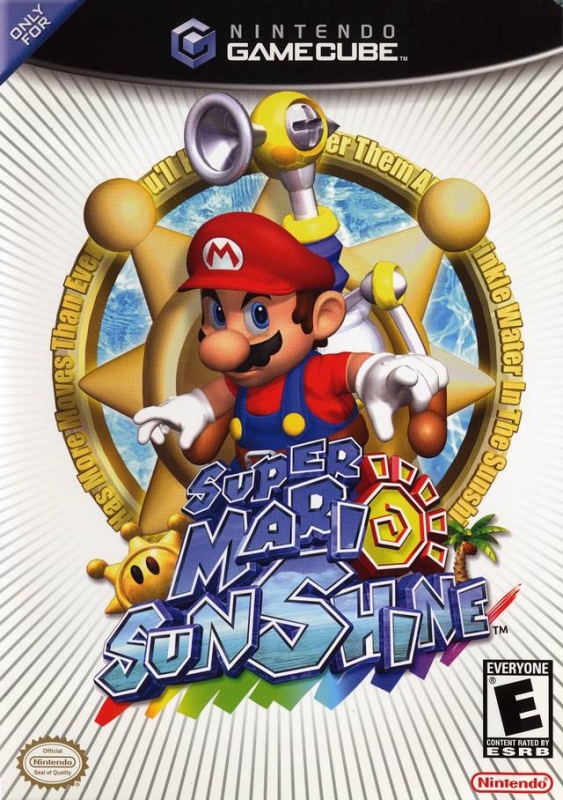 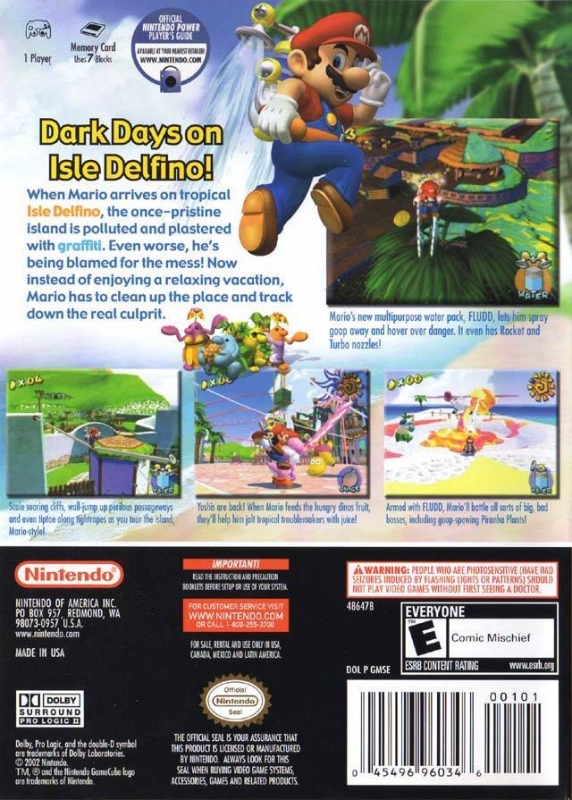 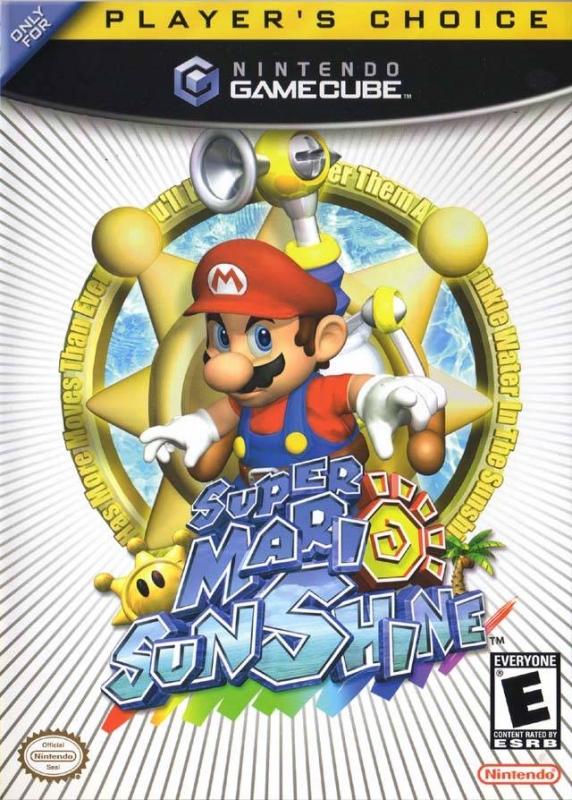 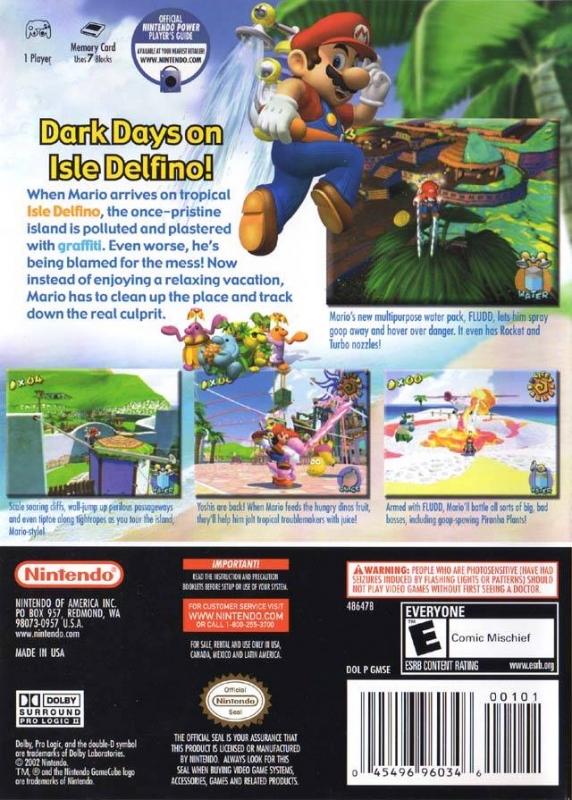 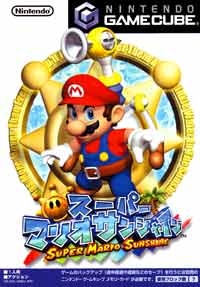 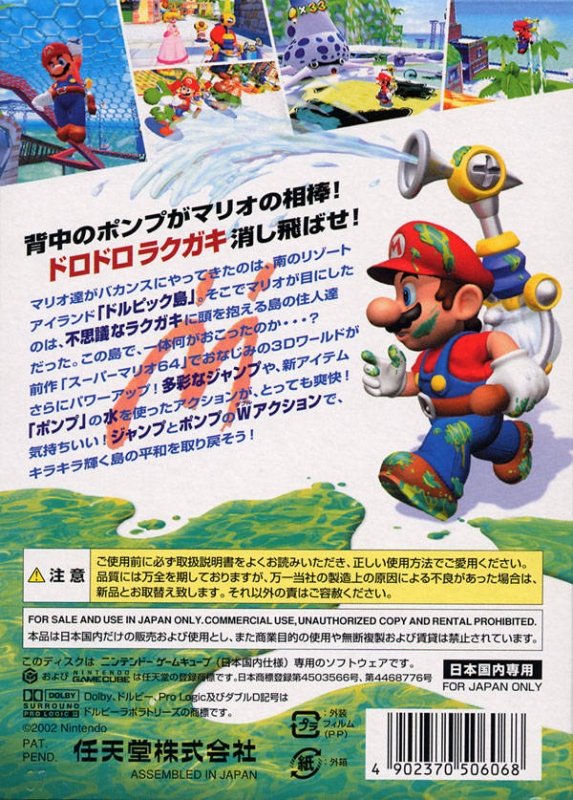 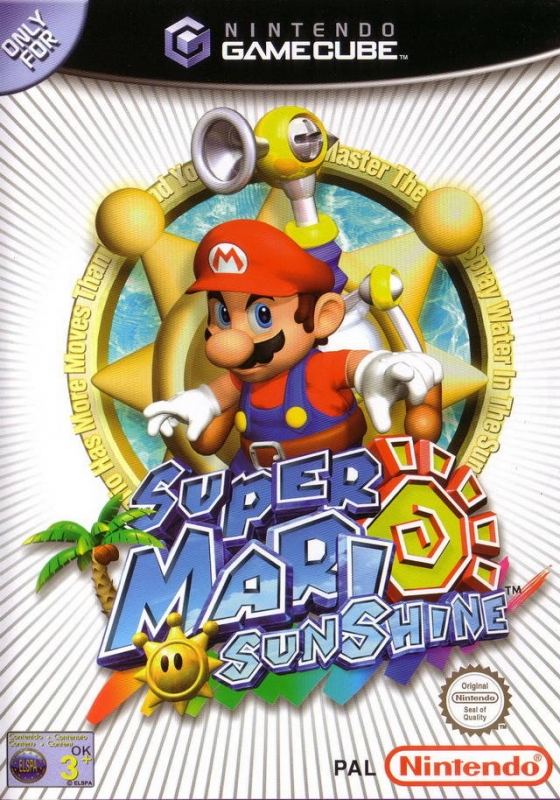 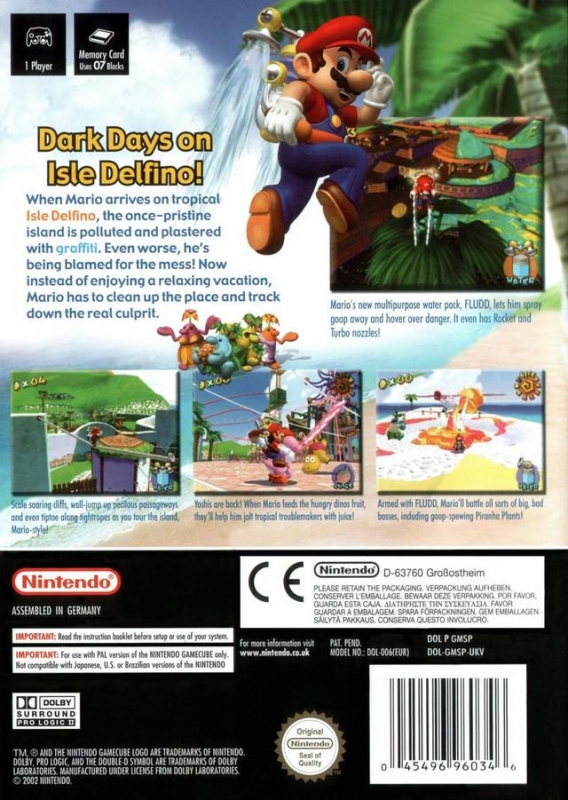 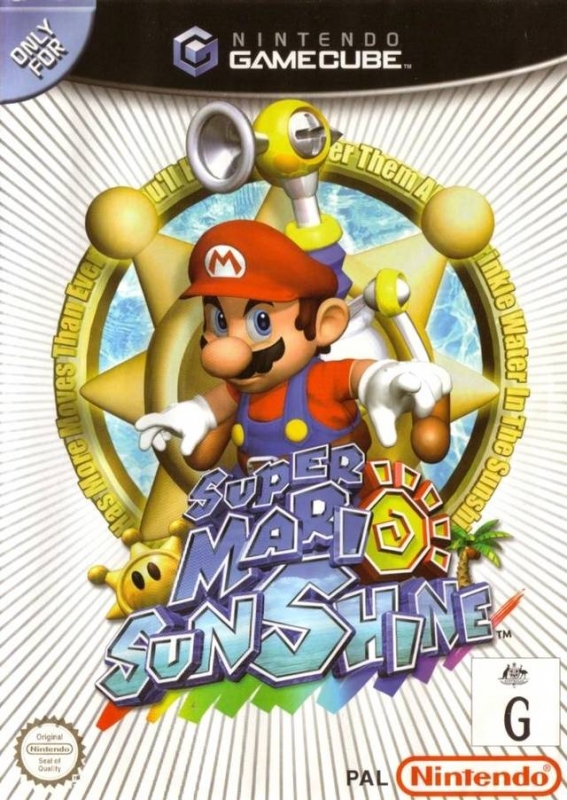 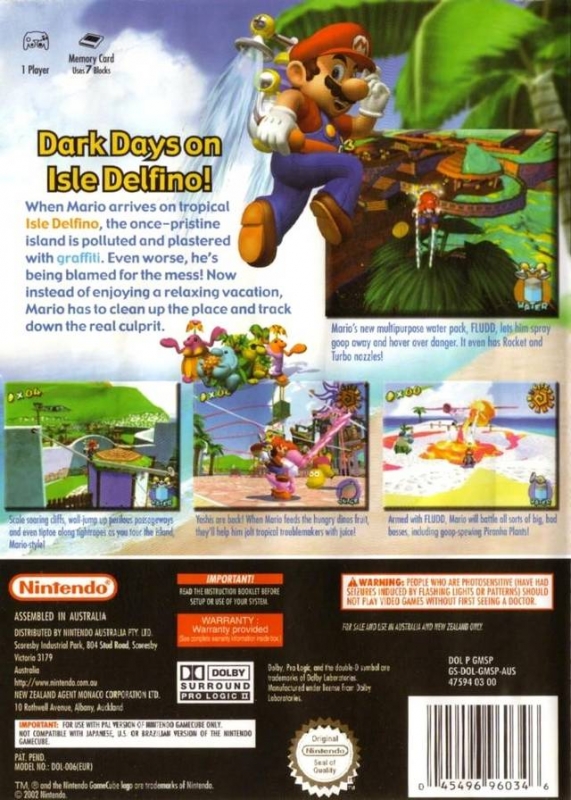 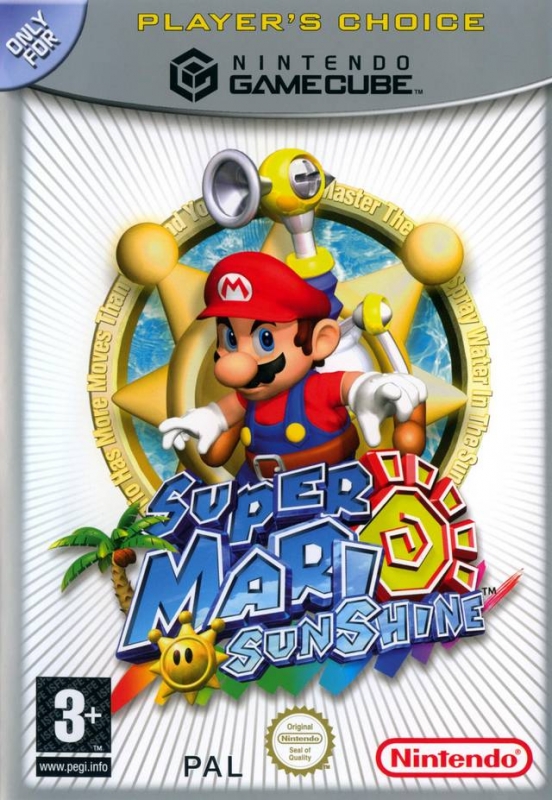 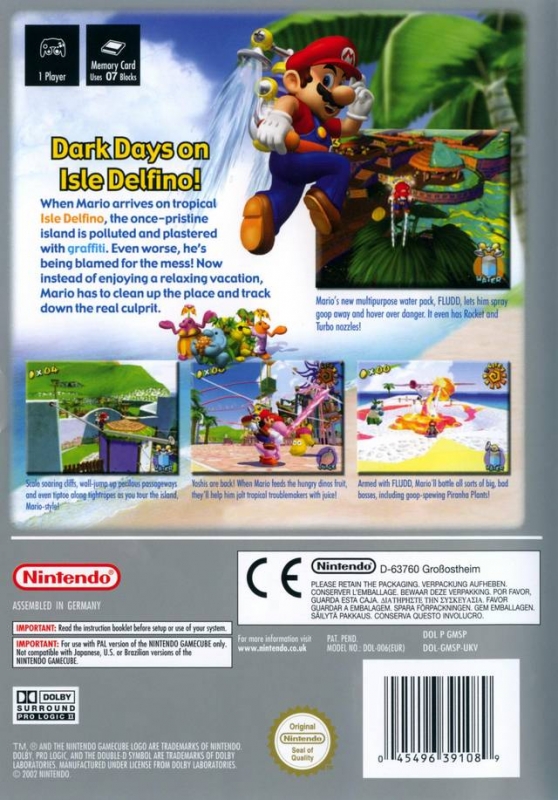 Spray the wanted of Mario posters in Delfino Plaza to get one Coin each. Some do not always give Coins.

Spray into an open window in Delfino Bay to receive Coins.

In Delfino Plaza, most coins are in the underground manhole tunnels. Also try eating birds with Yoshi.

The best way to get 100 Coins is to defeat Bowser and get access to the airstrip. You can easily get 100 coins there. Otherwise, you can travel the underground pipes to collect coins and spray the "Mario Wanted" posters.

When in Isle Defino, collect 50 Coins to get one life then go to the Pianta who throws you into the window. Pay him one Coin, then steer away from the window and get another coin. You will get another life. Repeat the process for more lives.

Delfino Plaza: Lighting up Isle Delfino
The more Shine Sprites you collect, the more sun will get though.. When you have collected sixty Shines, all of Isle Delfino will light up.

Delfino Plaza: Shine Sprites
In Delfino Plaza A, go to the far end of the beach near the lighthouse. Spray all over the sand until you find an area where the sparks fly. Focus the water there until a Shine Sprite appears.

In Delfino Plaza B around the lighthouse area, find the pillars in the water. Jump from pillar to pillar using your Hover Nozzle. Jump until you get to a pillar with a pipe on it. Go into the pipe, and complete the obstacle course to get a Shine Sprite.

In Delfino Plaza C, on the west side of the plaza, there is a man on a rooftop with a weathervane that asks you if you want to pay a Coin to be thrown. Face the bridge with the tower on top and ask. You will be picked up and thrown into the tower, where a Shine Sprite is waiting for you.

In Delfino Plaza D, on the left side of the big tower with the defaced Shine Sprite, go into an open building. A man will give you a Shine Sprite if you break all the boxes in the room in 30 seconds or less. This is easy -- just do the Ground Pound (A + L). After that, you can go back and face even more boxes stacked up, and you will get a Shine Sprite. This is more difficult than the first time. Use a group of two stacked up boxes to get to the higher stacks and work your way down.

You can still do the crate mini-game on Delfino Plaza even after you get all the Shine Sprites from it. This will restore all the Coins and 1-Up Mushrooms in the level, but you will keep all the Coins you had when you starting the mini-game. Use this to get as many lives and coins as desired.

In Delfino Plaza E, Go to where the bridge crosses over a harbor where a boat constantly goes under. Get on top of the boat, and where the Coin is floating under the bridge, do a double jump into the Coin. You will surpass it and fly into a level where you must collect eight Red Coins to get a star. Its very difficult, but very fun.

Wash both of the bells in Delfino Plaza to get two Shine Sprites.

Wash the big sprite to get a Shine Sprite in Delfino Plaza. Do this by using the Rocket Nozzle.

Get the Yoshi on the roof then go to the manhole near where one of the boats are located. Go under the bridge, where the Coin hovering under the bridge is located. Go in the manhole and get to the island with the lady with the basket. While waiting for the second boat to come in, spit down a couple of coconuts to save on the ground. When the boat arrives and starts to circle the island, eat the coconut for the long trip, then jump on the boat. When the boat gets to the little tower where the banana is located, hop on the tower and wait for the third boat. When it gets near, eat the banana and hop on that boat. Ride it to the island where the stranded guy is located with the campfire. Spit with Yoshi on the stuff blocking the pipe. Hop into the pipe and it will take you to another star puzzle where you have to get on a leaf and squirt to go downstream and get the Red Coins. If you miss some, try to hover to a ledge and work your way through the channel, picking up Red Coins by hovering over then and landing on the ledge on the other side.

On the eastern part of the town, swim to the island where there is a man , a fire, and a pipe. There will be a yellow bird on the island. Spray the bird about three times and a Shine Sprite will appear on the pillars near the lighthouse.

Get a Rocket attachment and go to the lighthouse. Once there, rocket to the top of the lighthouse. You should be standing on a Black Pad with a fire symbol. Rocket up, and when high up, Ground Pound. The Black Pad should break, giving you a Shine Sprite.

To get an extra Shine Sprite on a fairly easy sub-world, get the rocket FLUDD attachment and head towards the red cannon at Delfino Plaza. Swim along the right side near the rocks and pass the sideways hanging palm trees. Just past it, charge your rocket and jump just before the meter fills up. You will be able to enter a pipe on a tiny cliff. The mission is to collect eight Red Coins on one supply of water -- fill up before going there. There are two obvious Red Coins sitting around. To get the other Coins, shoot the red bird that flies around, extinguish the man on fire (shoot only when you have a clear shot to preserve water), jump on the two Flowerheads, shoot one Purple Flowerhead from a distance and jump on him, look around the high grass for an opening where a Red Coin lies just below (look near or around the edges of this area).

To get this Shine Sprite you need the Speed Nozzle (28 Shines required). In Delfino Plaza run around and face the "M" on the statue. Look to your left and you will see a building with swinging doors. It is the building where the man tells you to get the graffiti off his wall. Run up to the doors and charge up your Speed Nozzle. When you release it, it will shoot you through the doors where you can get the Shine Sprite.
Back to Cheats