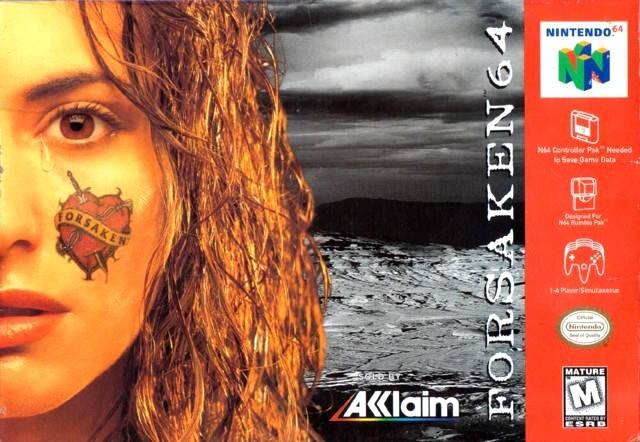 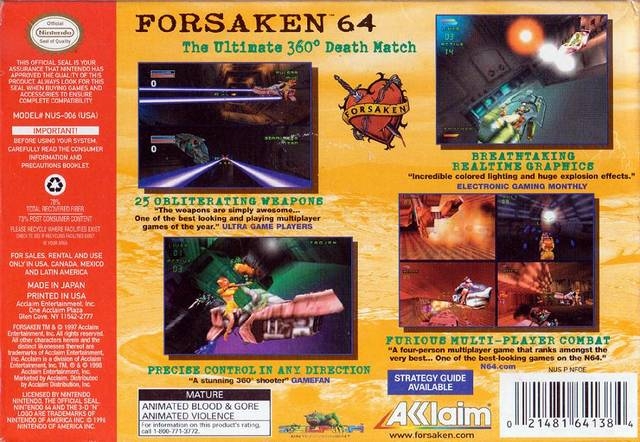 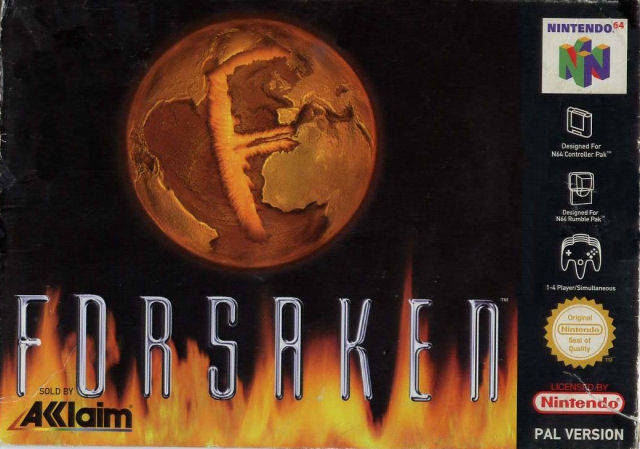 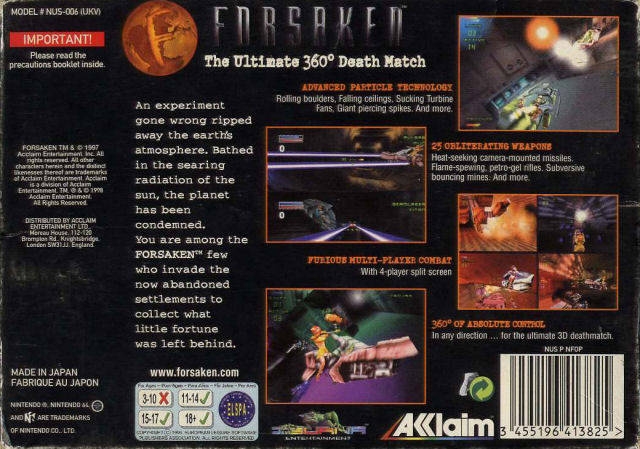 Remember Descent? You know, the crazy zero-g first-person shooter that put you in the cockpit of a small ship and forced you to reenact the end of Return of the Jedi over and over again? Forsaken is, at its core, a Descent clone. But stunning graphics, a dazzling array of weapons, and above-average level design make the whole thing seem fresh.

The game's simple scenario is set on a postapocalyptic Earth. Most of the planet is in ruins, complete with loads of goodies, ripe for the taking. You play a scavenger on a hoverbike, and you'll traverse military installations, nuclear reactors, refineries, temples, and more in search of gold and crystals. This may sound like a cakewalk, but Earth's automated defense systems are still intact, littering your path with all kinds of annoying drone ships, tanks, and turrets. The single-player levels in this version of the game are different from the levels in the PC and PlayStation versions. Some of them require you to simply destroy every enemy on the level, while others pit you against huge boss ships.

The weaponry in Forsaken is unique. Each weapon has three levels of power, depending on how many power pods you've found. The Suss gun is a spread-fire weapon that quickly shoots a mess of projectiles in your enemy's direction. The Trojax is a charged weapon that gains power (and sucks ammunition) when you hold down the fire button. Transpulse shots can bounce off walls, making them good for surprise attacks in multiplayer games. The Beam Laser simply emits two monstrous beams of death. It requires pinpoint accuracy, but it does insane amounts of damage. Secondary weapons include the Scatter missile, which causes the victim to drop all of his weaponry. The Multiple-Fire Rocket Launcher quickly spits out tons of small missiles. The Solaris homes in on its target. The Gravgon missile creates a vacuum at its point of impact, sucking enemies into its gravitational field and holding them in place for you to take out at will. The Titan is the most devastating weapon in the entire game and will frequently take you out as well if you aren't careful. There are also three different types of mines that will help you keep enemies off your tail and a nitro boost that will allow you to escape from sticky situations.

The control in Forsaken 64 is very well done. The game moves quite fast, but once you've grasped the control scheme, you'll easily be able to keep up with the action. The multiplayer in Forsaken 64 is pretty well done. Even on a four-player split screen, you can still make out what's going on, although long-range rocket shots get pretty hard to make. You can replace any missing players with computer-controlled deathmatchers, so you can just take on three CPU opponents instead of actually having to deal with humans.

Between the various multiplayer options and the great single-player mode, Forsaken 64 comes out a real winner. Save for Rare's Goldeneye 007, it easily defeats the other first-person shooters currently available for the N64.