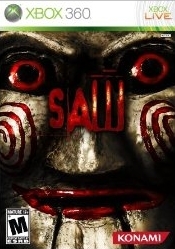 Jigsaw has killed your partner and destroyed your life.  Now he has trapped you in an abandoned insane asylum that he alone controls.  If you can defeat his brutal traps and survive, you may just discover the truth behind what drives this twisted serial killer.

SAW is a third-person perspective, survival horror game based on the SAW film franchise, which has grossed more than $665M worldwide and sold more than 28 million DVDs.  The game features many of the deadly mechanical traps seen in the film, as well as terrifying new ones.  Players will pit their wits against Jigsaw as they navigate his world in an attempt to evade and escape his gruesome traps, while also struggling against his minions in brutal combat by using weapons found within the environment.

SAW, the video game, is based on a treatment from Zombie Studios and the creators of the SAW franchise, Leigh Whannell and James Wan.

The timeline for the game takes place between the movies: SAW and SAW II, giving the game its own story, yet fitting within the narratives of the movies.

The story centers on Detective David Tapp who awakens in a decrepit, abandoned asylum.  He has been captured by his longtime nemesis, Jigsaw.  Obsessed with catching this serial killer, Tapp's mission has consumed him and ruined his family, resulting in divorce, mental imbalance, and abandonment. Worse yet, this frantic hunt destroyed Tapp's career while he watched his long-time friend and partner get killed by one of Jigsaw's traps.  Now Jigsaw has the upper hand and has captured the detective. Tapp must play a deadly game-the likes of which he has been investigating for years-to escape, and in order to do so he must survive the lethal traps and puzzles that Jigsaw has put in place for him and others. But each victim has a dark connection to Tapp. Will Tapp save them? Can he survive his obsession to find the Jigsaw killer?