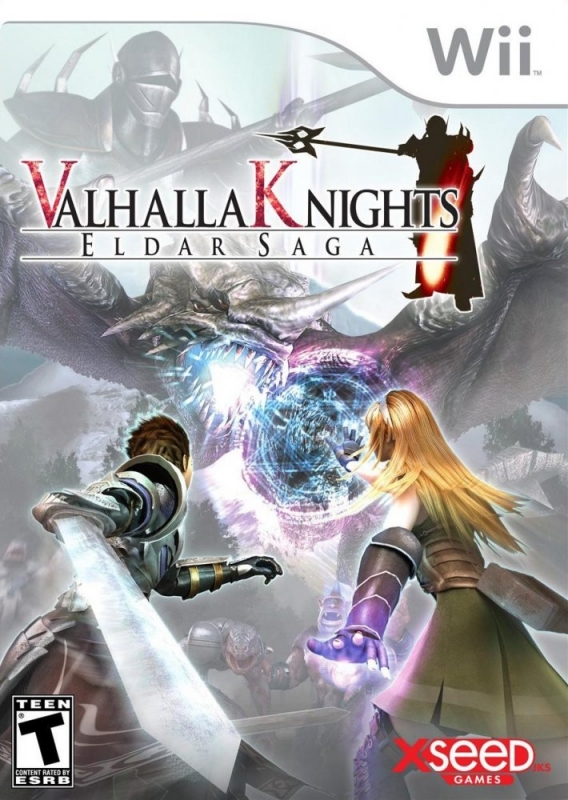 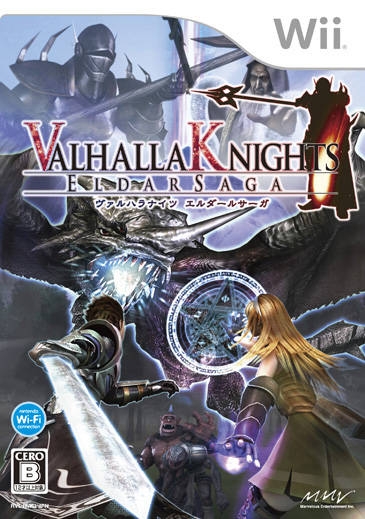 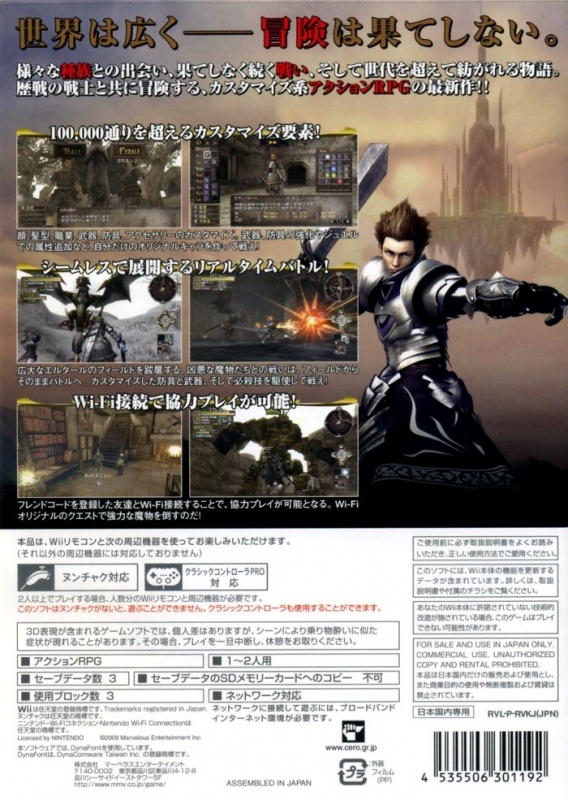 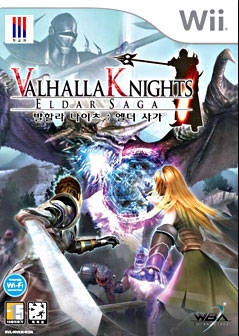 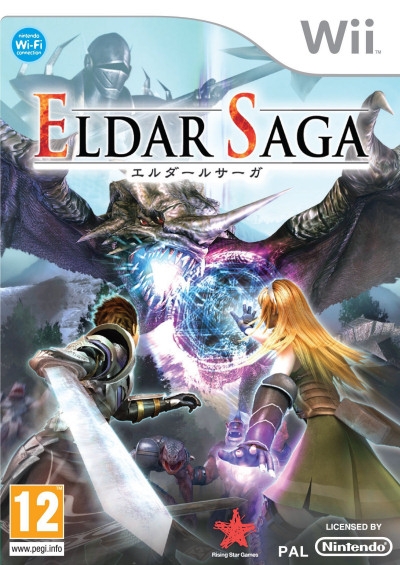 It isn't only not as bad as some make it out to be.

Presentation - 4.5
Gameplay - 8.5
Value - 8.0
Valhalla Knights, is a game that takes some of the most unused things in Rpgs, and implements them to an average level. It does have a large learning curve, but it is something well worth learning.

So you may ask, why are people enjoying the game despite it being "insert word". Well that isn't something I'm going to answer. I'm going to answer the very basic questions. These include:  "Is the game good?" "Why do you like it" "What are the negative points", etc.

Valhalla Knights: Eldar Saga is an Action Role Playing game, as many of you readers know. Now while the combat is Action oriented, the game starts out very slow. In actuality, it starts out so slow you might think of it as an extremely sub-par game. You find that this slowness, has to do with the games idea of making you utilize your environment. You will have to run, find higher ledges, or hide behind trees or rocks just to get that right advantage. This is especially true for anybody who utilizes magic. As, the game progresses things start to speed up. This isn't due to the actual combat getting faster, but you gaining more advantages environmentally and statistically. It is quite satisfying to have to start out hiding behind something, level up stats,skills, or gear, then later  coming back to find that you don't need to do that anymore. It really provides a realistic idea of progression and developement as a player. You also can utilize mercenary's who can speed up gameplay a lot. They are very important to range and magic users who need distractions at the start.

This doesn't mean that the game is without grinding to get to that success though. That is probably a lot of what you will be doing in this game. Especially if you want to perfect a skill, job, etc. What truly is an advantage in Eldar Saga, is the Job and leveling systems. Vallhalla Knights doesn't make you choose a set class like you would see in many single or massive multiplayer Role Playing games. Instead, it uses the old "Job" system found in various Final Fantasy and Dragon Quest games, as well as many older western developed Role Playing Games. This allows you to switch between jobs at any time of the game. It also allows you to utilize the stats and skills of the other jobs you leveled, even if you don't play as that specific job at any point of the game. The best thing about this though, is that you can change your play style when ever you want.If you don't like being a mage, you can switch to a warrior. There is a total of 5 basic classes, and later unlockable advance classes. The basic classes are Mage, Warrior, Thief, Bard, and Priest.  Each job maxes out at lvl 50.

This game also uses the old STR, DEF, INT, system found in many old time Role-Playing games as well. Because of the flexibility with the job system, you can choose how you want to level up these stats. You can level up all your jobs to a certain point, and use the points that you get from leveling them into certain stats, multiple stats, etc. You can also choose to keep leveling up a single job until it maxes out and then start with another. It works however you want. I do have to admit though, some ways are much easier than others.

In addition to the stat increase you get from each job you also get specific skills for the Job. You get 1 skill point per level, and skills usually max out at either 1, 5 or 10 points. Each job has about 10 skills, and you really need to think about which ones you want to invest in, and which you don't. You can only attach 2-4 passive skills - depending on how many of the 4 slots they use individually . Passive skills change gameplay drastically, and you need to think about which ones you want to use for the best combinations or your playing style. There are also other "magic" skills that either heal things, temporarily boosts stats, or inflicts damage. You can have 4 of these at a time. There is a primary and a secondary option. To access the secondary option, you either press 'up' on the classic controller or the wiimote d-pad. As with stats, skills also can be used with other jobs.

Armor and Weapons have their most importance in physical jobs like Warriors and Thiefs. You start out with a certain "maximum amount" of equipment you can use or wear. Usually the better the weapon/armor or the type it is, determines how much of this 'amount' is used. You can boost this "maximum amount" as well. This ties in with the STR stat. Equipment can also boost other stats such as Magic and Speed and even if they are weaker, you should choose them if you specialize in those areas. Other than that, you can also boost the power and reliability of this equipment by a refining them at a smith. This has a risk though. If you go too high it has a higher chance of failing, and you will lose the item.

So as you can see, the statistic and leveling systems has a very large amount of customability, and you can find yourself adjusting this customabilitiy to fit just the right area or style of gameplay you want. I can present an example of this:

I played the whole game as a Magic-user. I came to the point where I had to "choose" which skills and stats to boost. My "int" was at a good enough level, so I chose to  boost my speed which allows me to move faster and be hit less. I could have instead chose to become even more of a powerhouse and try to get to the point where I have to one hit kill on everything or it will backfire. Because I like to choose the safe side, I chose the evassivness that came with speed over being a power house. I then later had to choose between two skills. One skill allowed me to still use a spell even when hit, and the other boosted my magic speed. So I would play either slower but safe, or faster but stronger and quicker. So that really is just a little bit of the depth the game has in gameplay. I could go much deeper.

Probably Eldar Saga's weakest point, is the presentation. The graphics are extremely bland, all being a color with a tint of grey to them. The effects are beyond sub-par for a PS2 game let alone a Wii one. The art goes too much toward realism, but doesn't back it up with quality. There are many graphical glitches. The world is varied, but it all seems the same really. Environments follow the same basic set-up of, ledge and then ledge and ledge, and more ledges. There really isn't anything else in the level design. The music is pretty good, but again, very low quality. You will also get annoyed by some sound effects like the footsteps or the in my case, the noise Dragons make. Luckily, you can change it to increase the music. There isn't any voice acting(other than the opening cutscenes), and that pulls a little bit from the experience as well. Overall, it isn't polished at all in this area, yet somehow it doesn't add or detract from the experience this game boasts.

This game has tons of value. I clocked about 50 hrs so far, and I'm still not done with everything I want to do. How long it takes to beat really depends on how to go about playing it. If you are the completist, it will take you about 30hrs to beat the main story and all side quests. If you are beyond being the completist it will take you 50hrs to beat the main story + side quest and you will also play again and again. You will find yourself replaying it, just to make the perfect character. If you are one of those who just breeze through the game, you will probably spend 15hrs on it. With the addition of online, there is even more value. Online is somewhat of a dissapointment though, and despite what some may say it isn't the boasting point of the game. Online is exclusive to about 20 side quests that you finish with only one other partner. Some things  you would automatically assume to be present in the online isn't there at all. You would assume to see your other players damage, yet you can't. You would assume to gain experience when doing online quests and killing monsters, yet you don't. You would assume there is an online shop or bank to store and buy new items. Yet there isn't. In addition to the assumptions, there is somethings that aren't present that would have made it much better. I won't be judging these though, because I don't review games on what they should be but what they are.

The main story of the game is very simplistic and straightforward, but it has a charm to it. The characters and their interactions are similar to something you would see in a Zelda game, and for the most part your protaganist is silent. Even some side quests have stories to them, and rarely are they go kill 10 of these, or go find 20 of those. There are two episodes in the story. I'm not going to get discriptive due to spoilers, but basically what you do in the first episode and what happends pre-scripted, affects the second episodes story to a large degree. The story of the game is another positive, and it is an example of keeping it simple yet interesting.

Overall I would say that the amount of content, and the level of fun the gameplay provides is enough to warrant a buy. If you are low on cash a rent. It definitely needs to be given a chance to anybody who has the time to get past the learning curve. If you don't have that time, please don't get this game  at the moment. Your opinion will only be negative. The game is definately worth the full priced payment if you do have the time for it and I hope to see more people playing.