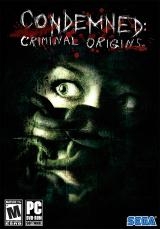 Condemned: Criminal Origins allows players to experience a heightened level of psychological tension as they use their instincts, forensic tools, and melee/firearms combat to track serial killers and bring them to justice. Gamers will play as Agent Thomas, an investigator in the FBI's Serial Crimes Unit (SCU), whose pursuit of relentless serial killers leads him through urban environments filled with sociopaths lurking on the periphery of humanity.

Presented in a first-person view for maximum visceral effect, this atmospheric thriller is best played with the surround-sound up and the lights off. Given the power of nextgeneration hardware, Condemned: Criminal Origins features photo-realistic backdrops, life-like physics, and highly sophisticated artificial intelligence. Weapons and ammunition are scarce, leaving the player vulnerable to a gallery of mentally deranged criminals. Careful detective work and precision reflexes are a player's primary means of survival. Inspired in part by the films of the psychological thriller sub-genre, Condemned: Criminal Origins maintains an intense, focused pace. Players can never be sure what waits around each corner.