Michael Pachter: Switch Successor Won't Release Until 2024 at the Earliest

Fatal Frame Director Considering Remastering Other Titles in the Series

Netflix is Not Planning a Video Game 'Buying Spree'

It was never in doubt that Halo: Reach would be one of the biggest games of the year, but with the release of the game now less than a week away, VGChartz brings you the latest pre-order figures and week one predictions.

Anybody who has been following our Americas Pre-Orders charts will have seen that total pre-orders in the Americas (USA, Canada, Latin America) has now surpassed 1.6 million units and that the pre-order pattern for Halo: Reach to date has been very similar to that of the XBox 360 version of Call of Duty: Modern Warfare 2 released last year as shown in the comparison graph below:

VGChartz expects Halo: Reach to perform very similarly to the Xbox 360 version of Modern Warfare 2 in the Americas, but going by historical trends and Reach pre-orders to date, sales in EMEAA (Europe, Middle-East, Africa and Asia) will only represent around 30% of the Americas sales compared to 50% for a typical Call of Duty title on Xbox 360 - hence why worldwide totals are predicted to fall short of Modern Warfare 2 on Xbox 360. That said, we do expect Reach to perform around 10% higher than Halo 3 did in the first week and become the fastest-selling Halo title of all time. Halo: Reach releases on September 14th exclusively for Xbox 360. Be sure to check back after launch where VGChartz will reveal our estimates for week one figures.

I really only majorly support this game because it is made by Bungie. I'm tired of the franchise myself, but I know they make the highest of quality games and I'm a huge fan of theirs.

I've sold my PS3 to buy the Halo Reach Bundle!.. at least, a real multi player game to get my teeth into......I think Sony's done!.. bring on Kinect

For some reason my comment was removed, as i already said, this will outsell MW2 for 360. The question is by how much. My guess 5.2 million units first week.

Hoping my uni flatmate is getting this. Live action adverts on TV are looking sweeeeetttttt!!!

someone is gonna eat some crows ...

"People need to wake up and support quality games!!"

Thats why people are buying Reach - Best game of the year !

CoD is the Halo Killer

I didn't pre-order, I'm am getting it DAY ONE...waiting for some last minute deals to jump in...it's not like it is going to sell out in week 1...lol. As I've been saying for nearly a year...there are going to be alot of crying and excuse making on 15-16 Sept when the day 1 sales figures are announced!

What a sad day for the gaming industry!
People need to wake up and support quality games!!

I think halo reach will hit 5.2 million first week sales.
I think it is very possibly with the people who didn't pre-order. I have two friends that want the 360 reach edition and missed the deadline at gamestop to get one. they don't have credit cards and can't order off best buy, so I think I will see them either pick up a unit and then get the game or find a halo reach unit floating around in the stores. One has a xbox, one does not.

I wonder how many people are waiting to see if they can get there hands on a special edition? End up buying just the regular edition or the extra's shipped to stores.

Halo: Reach will kick ass and it will sell 5 million copies in its first week. 3 million+ first week sales in the NA region alone.

just went out and pre-ordered my copy today! I never pre-order games neither... this is so exciting.

@ binary solo
I would say since the 1st Xbox launch sold consoles mainly in the USA ( to be fair it did come out nearly 2yrs after the PS2 which was already too far ahead, in which Sony had become the new 'Nintendo' ) .. so what im getting at is Halo was sort of the 1st game of its kind on a console in many ways .. like its use of Xbox Live back then was revolutionary not because it was a 'new' idea on a console ( PS2 had a system for online play ) but because it was the most practical and best implemented and most usable, but back to the first halo game..'Halo Combat Evolved' was native to a console mostly in the States (USA) which is where it sells more now... No matter what country you're in they seem to be 'Loyal' to a game that is first of its kind as far as to keep buying it. Final Fantasy is a good example.. Many other RPG's like FF came out, but none could top it.. I think although there are many variables in which one could give reasons.. It seems to be that on ANY CONSOLE anytime a game comes out that is the 1st of its kind and/or the best of its kind before someone else can be 'best' then You're pretty much locked in for life. Look at Madden for example.. been around for how long ? I do think as the 360 continues to sell more that more people in the EMEAA are going to try Halo .. So Reach has a chance of selling better then Halo 3 did in the EMEAA, or the rest of the world for that matter because there are 10 more million 360 owners worldwide since halo 3 launched ! And yes, that means COD also has a chance of selling alot more copies as well..

Interesting. I think it's pretty well settled what the America's sales are going to be like. So the fun bit will be to see whether Reach can reach a wider audience in EMEAA than the existing Halo base. I find it curious that there can be MW2 fans out there on 360 in EMEAA territory, yet they are not big Halo fans. Doesn't seem to compute; but I'm not a Xvbox/Halo/CoD/FPS fan so there are possibly subtleties I'm missing.

On the previously similar post of this kind on VGchartz when 'Reach' was nearing the 2 million mark.. some PS3 fans had made the comment basically echoing "If Call of Duty was a 360 Exclusive title it would outsell Halo" in a sort of hateful way ... Funny thing is it did outsell it..

Even though Worldwide sales of COD MW2 slightly outsold Halo 3, the USA had more Halo buyers, but the rest of the world added to that put COD MW2 slightly over Halo 3 sales.. will be interesting to see how Reach does !

Find it strange that CoD tends to sell bigger outside of the Americas than Halo. Considering the potentially politically distancing subject matter of CoD on the world scene in particular.

Oh well, maybe this will prove to be different.

Wow, look at that, MS domination at the biggest first week ever. And it will have another game in the top 10 with Gears 3. Go Reach

I'll be ballsy and figure they'll manage to bust 5 million the first week. While the odds are against me, I'd be pumped if I were right. lol

i still not decided on what version to get...

Great article and solid write up but I do think your estimates are slightly too low. I'm thinking Reach's opening week will land somewhere between 4.5 - 4.7 million copies. I wish it could do 5 million but that seems out of the question at this point.

i still think this game is gonna be 5M Week one as this is only estimatives based on previous Halos... I think EMEAA Launch will surprise many people.

WoW. Xbox owns week one sales. 5 outta the top 6. That's nuts considering how new the Xbox brand is, and how badly the original Xbox got owned in hardware sales by the PS2.

ALSO i think your find 70% of MS profit will come from limited additions and merchandise which is HUGE business and sells the whole year round.

Halo as a brand is huge... you will never see a MW film, comics, books, toys etcs. So im sure MS are pretty happy with what Bungie has done for their console business im sure Bungie can take some credit for making the Xbox what it is today. In allot of ways Halo made Xbox live what it is today.

after thus game halo no longer exsists....MW does and we are tracking againt the 360 version.... MW is as big a band for MS as halo... if now bigger you can see that by looking at sales and preoders compared to other consoles.

I exspected this, Sci fi has less main stream appeal than real life war sims. I know allot of people who dont play halo coz they aint into Sci Fi.

ALSO i must say MW2 in the UK was massively discounted! And even tho it was the biggest selling game it didnt make the biggest profit due to this. Halo isnt at all discounted i think your be shocked to see the profits compared. In the UK they were selling the game for £25 for the 1st two weeks at most super markets just for sales figures.

Why does this need to become the best selling 360 game? Just because its so heavily marketed doesn't mean it has to break records. As for this Pre-Orders, its looking pretty good cant wait too see the sales results.

God I hope your wrong. Reach needs to be the best selling game of all time on the 360. For Microsofts sake. 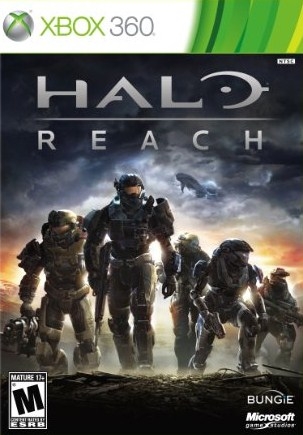