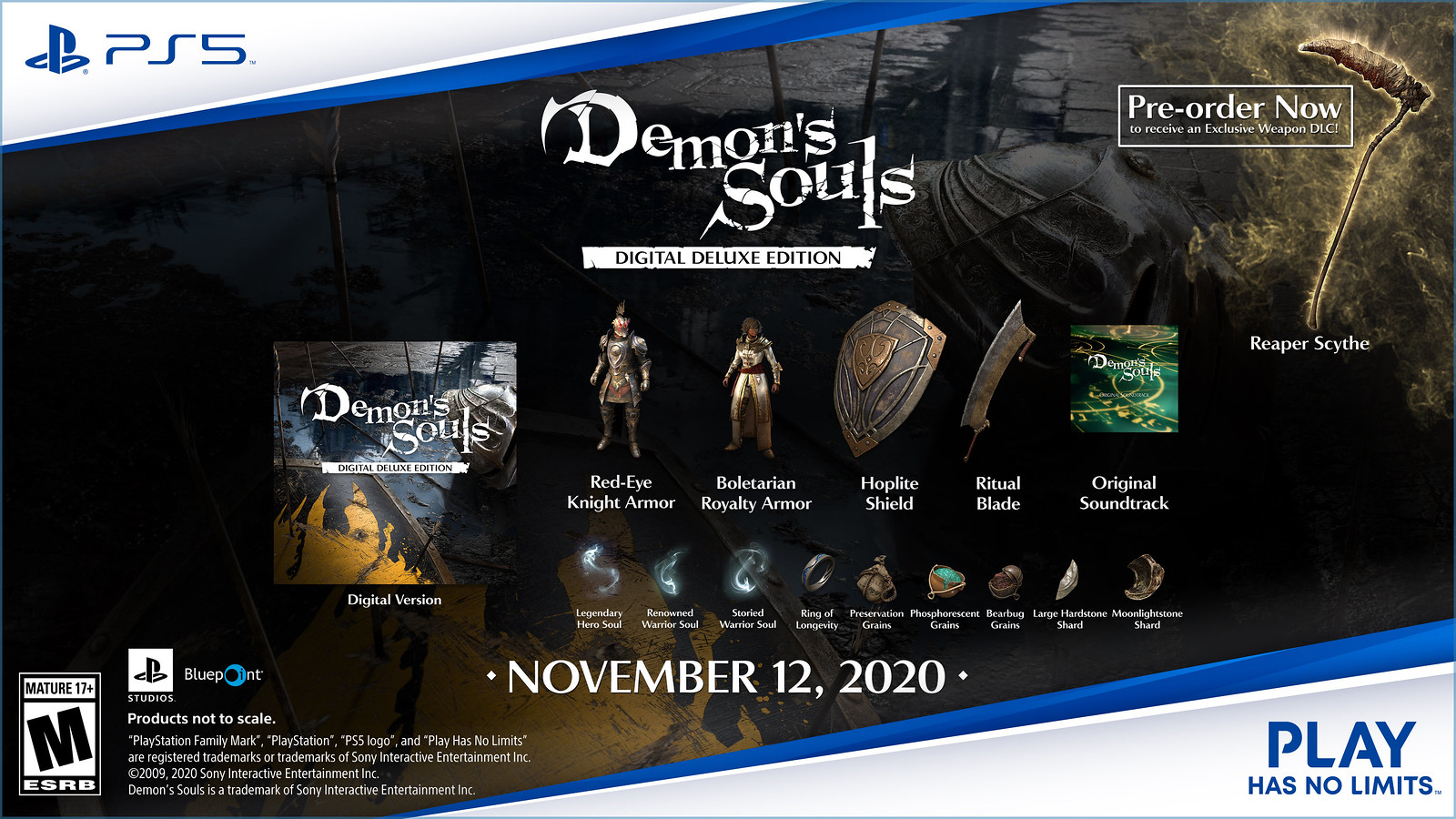 Read information on the Digital Deluxe Edition below:

The Demon’s Souls Digital Deluxe Edition, available to pre-order today at PlayStation Store for $89.99 / €99.99, includes the full game and additional in-game digital content to prepare you for the ultimate challenge, including:

Pre-order any edition of Demon’s Souls from PlayStation Store to receive the Reaper Scythe weapon, once wielded by sorcerers who commanded the spirits of the dead. The Reaper Scythe is a pole weapon with a curved blade on one end that is so sharp that they say it can sever your soul from your body. It can mow down many targets in a single blow, but is difficult to handle and requires both strength and dexterity to use.

Entirely rebuilt from the ground up, this remake invites you to experience the unsettling story and ruthless combat of Demon’s Souls.

From PlayStation Studios and Bluepoint Games comes a remake of the PlayStation classic, Demon’s Souls. Entirely rebuilt from the ground up and masterfully enhanced, this remake introduces the horrors of a fog-laden, dark fantasy land to a whole new generation of gamers. Those who’ve faced its trials and tribulations before, can once again challenge the darkness in stunning visual quality with incredible performance.

In his quest for power, the 12th King of Boletaria, King Allant channeled the ancient Soul Arts, awakening a demon from the dawn of time itself, The Old One. With the summoning of The Old One, a colorless fog swept across the land, unleashing nightmarish creatures that hungered for human souls. Those whose souls were stripped from them, lost their minds—left only with the desire to attack the sane that remained.

Now, Boletaria is cut off from the outside world, and the knights who dare penetrate the deep fog to free the land from its plight, are never seen again. As a lone warrior who has braved the baneful fog, you must face the hardest of challenges to earn the title “Slayer of Demons” and send The Old One back to its slumber.

Demon’s Souls will launch for the  PlayStation 5 on November 12 in North America, Japan, Australia, and New Zealand, and November 19 in Europe and the rest of the world.

100 fucking euros? Are they insane? I will love to try it out in 2022 once it eventually hits PS+

Yeah I don't get Sony. Standard games were already 70 which was $82 so why so greedy

Alright i'm a huge souls fan but this does annoy me,atm they need to win people over by having consumerfriendly practices and not giving shitty items for a lot of money in contentual comparison to the base game.

$70 was tough enough; this is a bridge too far.

I love this game but come on Sony... this is ridiculous...

Has everyone never gamed before? This is a deluxe edition, so of course it's gonna be expensive. We have these today as well, look at psn, steam and xbox store. Just buy the normal game. Oh and the items are useless, nothing you can't get in the game itself and you don't even have to play long before getting these items.

Sony is getting really greedy this gen. Porting their exclusives to PC (which is great for consumers), but then asking $50 for three year old games (which is bad for consumers). Coming up with "Digital Deluxe Editions" of a remake of an 11 year old game. Charging European customers $90 per game.

$50 for three year old games... how much was Mario All stars again? And how old?
The Digital deluxe editions are in addition right? So they are just a third option. A third option is bad?

All Stars is a rip off as well. Having one complete game for sale as a single option is far better than having three different options, with different levels of content carving. Content carving is never a good thing.

I've actually never played a Souls game... This'll be my 1st. Heard they're really difficult and by the looks of the gameplay ... Yeah.... This should be fun lol. And so far from the trailer there won't be a PS4 port so hopefully this game won't be held back for PS5 :)

They are raising prices in 10 euros in europe , new games cost 70 euros now , new games Will cost 80 euros in ps5, digital deluxe edition cost 90 euros now , they Will cost 100 euros in ps5. I Will never pay for a fucking game 80 dolars , NEVER. These european prices are fucking retarded, dont cool yourselfs , Microsoft Will BE the same but with game pass now Sony Will get backlash but general public in europe Will not even know ... I hope Sony is forced to adapt and improve because they are fucking US europeans bug time

That's a total ripoff charging $20 extra for some in game items. Having said that, it's good to know that PS games go on sale after 3-6 months from launch. I really hope they keep their prices not that high!

That's a total ripoff charging $20 extra for some in game items. Having said that, it's good to know that PS games go on sale after 3-6 months from launch. I really hope they keep their prices not that high!

Well yeah i will just wait till i can get the super duper extra special jumbo edition for 30 euros, seens like a good reaction to a practice like this.

Maybe Sony is arrogant. PS2: user friendly. PS3: arrogant Sony. PS4: user friendly. PS5? Seems like they letting the competition, XBox, be the good guy, what with them building seemingly consumer friendly offerings, while they do the bare minimum and seemingly sit on the success of the PS4... The price hike, the PS5 upgraded Spider-Man behind a pay-wall while CD Project Red offers their PS5 patch for their yet unreleased super production Cyberpunk 2077 for free (an example among plenty other devs doing the same)... Seems like Sony is banking on the brand power they've always had so far. But MS is doing quite a lot to gain mind share, and if Sony sots on their laurels, they'll slowly but surely lose their edge. Because consumers are money conscious, and like they did with the PS4 vs The XBO, they'll go where the better deal is. And currently, it doesn't seem like Sony is willing to offer that deal. Call me disappointed.

Yeah, I'm seeing it too. Been reluctant to comment on it due to being a primary xbox fan though. Many would dismiss my opinion for that reason alone... sadly. There is a certain discussion to be had though. I don't think it's PS3 bad but the signs aren't great.

I've always a Sony fans, that's no secret, ever since the very first PlayStation which offered gaming experienced that seemingly grew in age and maturity at the same as I did, instead of keeping with a family friendly/E for Everyone the way Nintendo was and is still mostly doing (before you jump at me, keep in mind that I loooove Nintendo's franchises, I was just becoming a teenager at the time, and the edgy-ness of what the PS was offering aligned with my need as growing soon to be artist student) and even before that, with their TVs and sound systems that were of very good quality compared to the competition making sets in the same range. Offering good bang for the bucks and being reliable/lasting.

Sony was trying their beat to be the best or among the best, by innovating ot making product that were hitting above their range in one way or another (remember the Trinitron's picture quality?).

Now, while the PS5's tech is no slouch, regardless of the neglectable difference in TFLOPs with the competition, they did work their ass to innovate at least to try to kill off a bottleneck that's been in place since the very first disc based system... But they've been complacent when it comes to the service aide of things. And now they're saying they'll get behind the game price increase some money hungry third party publishers are asking for? While MS will offer brand new AAA titles day one for a mere subscription admission fee?

I don't doubt the ability for Sony to adapt. But XBox, thanks to the true gamer and industry lover that Spencer is, are showing what adapting is, and they're not pulling any punches.

I sincerely hope Sony isn't going to sit on their laurels and go all arrogant they way they were prone to be during Kutaragi's handling of the brand. But one thing is sure, MS is offering one heck of a competing edge, and that kind of competition will ultimately be good for us gamers. One new idea/concept allows other such to emerge, and the game of one upping the other goes on and (at least in the current situation where what MS is doing is concerned), we shall all benefit in the end. Let's just hope Sony won't take long to match or surpass what their competition is offering. Although to be fair, MS has been building up to this for quite some time now.

Sorry for all the big thumbs vs cell phone typos, and some missing words. -__-

I paid $90 for the ps3 special edition, that came with a nice cover, art book, soundtrack, small thick walkthrough guide.

I haven't ever played a souls game, but I got Bloodborne some years ago on PS Plus so I'll try this and see whether I'll pay for Demon's Souls or not

apparently people are crapping lots of money out these days, covid days haha

Having seen the trailers and the comparisons videos. One of those is far more obvious than another...

never seen sony so greedy in the entire ps4 era, like now