Inspiration is a funny thing. Sometimes it spawns out of the blue into something totally original. More often it draws from the great works that came before it. The latter is certainly the case with The Hong Kong Massacre. Combining the gameplay of Hotline: Miami with the action stylings of John Woo, new studio VRESKI aims to put its own spin on the top down shooter. But does Hong Kong stand on its own or is it merely a cheap knock-off?

This is the part where I’d normally introduce you to the game’s story and premise, but frankly there isn’t much of one. Brief, vague cutscenes and poorly localized, barely relevant written dialogue provide the minimum context for your actions. Something violent happened in your past. Now you’re on a vendetta to clean up the streets of Hong Kong. Go nuts! 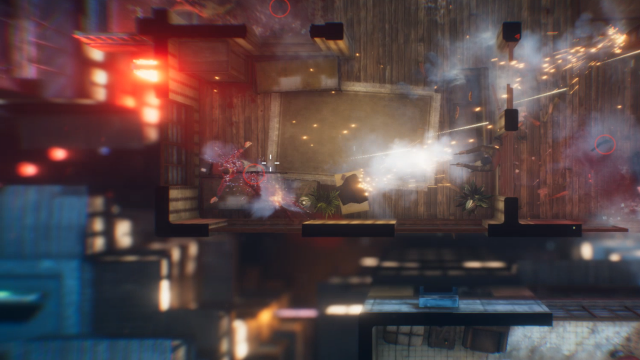 Much like the game that inspired it, Massacre is a top-down shooter taking you on an urban crawl through seedy buildings and streets. A wide camera that can see through walls gives you the edge you’ll need to take gangs of bad guys down as a one man army. Tools are basic. You start with a pistol and limited ammo. More guns can be looted off of corpses or unlocked through progress. A shotgun, machine pistol, and assault rifle complete the arsenal and each of the four can be upgraded with points earned along the way, including larger magazines and dual wielding.

More important than your choice of weapon are your dodge and slowmo abilities. Activate the former when taking heat to slide or leap out of the line of fire for a brief window of invulnerability. Activate the latter when breaching a room to line up shots on unsuspecting foes. Combine them both to unleash hell on your enemies in style. This core loop of gunplay is simple, but tight and satisfying. Rolling into a room and quickly dropping thugs all around you before you even reach your feet again makes you feel like one crazy badass. 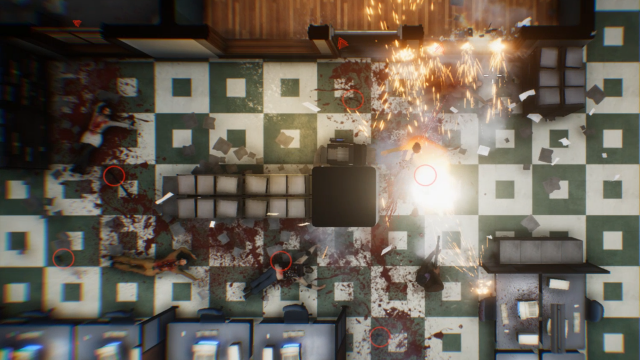 35 levels stand between you and your goal. Basic scenarios against ordinary goons evolve into lengthier, more complicated gauntlets against killers with quick reflexes and heightened survivability. Boss fights every seventh level break up each ‘day’ the action takes place over. This game can be punishingly difficult at times; a single hit is fatal, so you’ll be retrying levels constantly. Each of them also come with a few challenges to make things even tougher, including a time attack and forgoing slowmo. Completing these will let you upgrade your weapons even faster.

The narrow focus of this title puts the action front and center, so it’s a good thing that the action is entertaining to play, watch, and hear unfold. The 3D assets are mediocre (even for an indie title) and the cutscenes might as well have been storyboards with how stiff they are, but the colorful lighting and flashy particle effects help make up for it. Sparks, broken glass, and debris fly constantly in a maelstrom of mayhem. The action is punched up even further by a great soundtrack; the dark and hypnotic electronic score borrows from several genres and complements the carnage nicely, motivating you to give tough encounters another go. 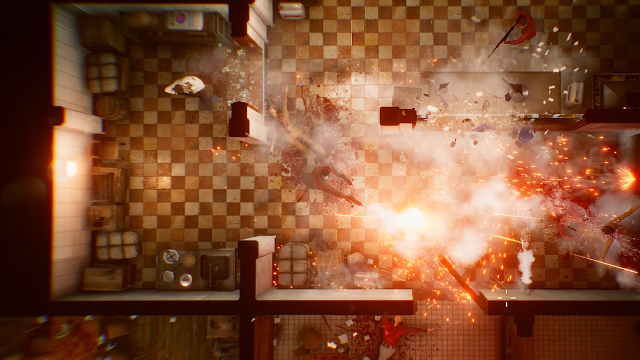 If the game has an Achilles' heel, it’s a lack of variety and prevalence of recycled assets. Little differentiates most levels from one another or makes you change up your strategy at all: You’ll see the same handful of goons over and over again; boss fights are nearly identical to each other, with merely more obstacles thrown in your way; four basic weapons can feel limiting compared to other shooters; and challenges don’t change between levels, so it’s always the same three. Whether the limitation was time, money, or resources, hopefully VRESKI adds more variety to future titles.

The Hong Kong Massacre is a Spartan project with a laser focus on the core action experience and little else. Those looking for a new way to scratch the itch left by Hotline: Miami or feel like an Eastern gunslinger would do well to give it a try. It may not quite stand shoulder to shoulder with its inspirations, but the combination is a natural and worthwhile one.

This review is based on a digital copy of The Hong Kong Massacre for the PC, provided by the publisher.

If you liked Hotline's combat and music, you'll probably like this too. It's just not as well rounded.

Watched this on Twitch and thought the visuals were much more appealing than Hotline Miami's, but the gameplay looked less polished (especially boss fights which could easily be gamed by simply not moving forwards through the level).