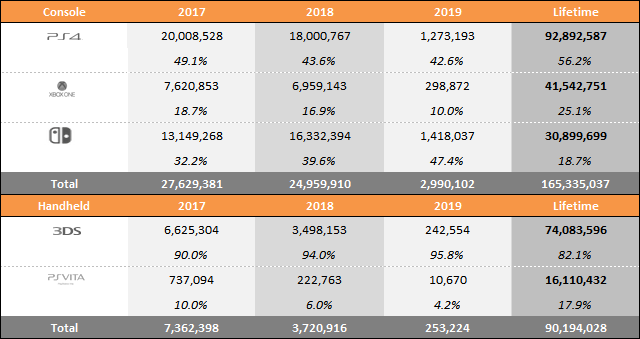 Not just the XB1

I know that the 3DS is getting near retirement, but one thing this shows is how it can keep up a solid tail end. It's in it's 8th year now and still doing decently well. Just compare its marketshare with the Vita.

Nah, the marketshare just reflects that Vita is dropping out way harder than the 3DS. I must say, Vita was the only console that really took a hit by the Switch-release. And looking at all the Vita-games co,ming over to Switch the devs seems to think so too.

I can't blame them for jumping ship. The Vita didn't really have that big of an install base.

I guess the two go together though. A large install base leads to a long tail end. Both Nintendo and a few third party devs kept supporting the 3DS even after the Switch released. I would expect the Switch to keep getting support after its successor releases too.

First: for the niche games the Vita attracted the install base obviously was big enough, because Vita got these games in the first place. Switch seems to cater this niche well enough, so the support jumps from Vita to Switch.

And the Wii had a large install base, but no long tail end. You may claim Wii is an exception, but there are about 40 consoles at all. With this small dataset in each "exception" to a rule probably means the rule isn't working universally or is outright wrong.

Well, the dataset for all consoles is pretty small, Nintendo handhelds is even smaller.

However, Occam's Razor can be applied. Look at all of the data and go with the relatively simple explanation that is most likely to be correct.

And think that new consoles only at the end of 2020. It will be painful for Sony and Microsoft to be there.

If this is the PS4 End of Life, its is doing very well.