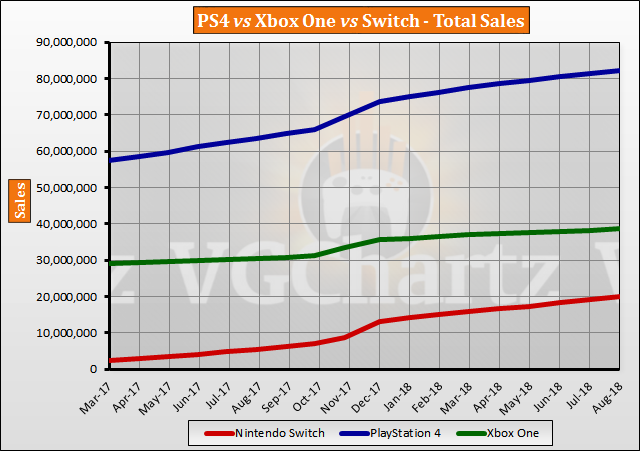 Looking at the total sales of the PlayStation 4, Xbox One, and Switch through August 2018 shows much of a lead the PlayStation 4 has on the Xbox One and Nintendo Switch. However, the Switch did launch several years after the other two consoles. 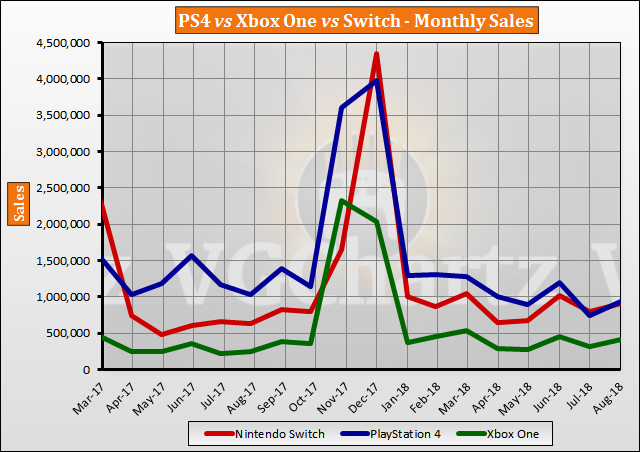 Taking a look at the marketshare, the PlayStation 4 managed to achieve 42 percent. The Switch accounted for 40 percent of the consoles sold, and the Xbox One 18 percent.

I know a red line who's gonna touch the green one by the end of next year :3

If the Switch will indeed sell those projected 20M this FY and keep that momentum going, it could even reach that before the holiday season starts next year.

Lowpoint should be over now its up and up for the next few months.

The blue and red are more and more touching each other. November should be the month where the switch takes the lead definitely.

Not sure about that. Blue's Holiday sales are just too high due to Europe mainly. If somehow Red can press into Europe then yes.

Switch is doing better than last year in Europe while the brunt of the PS4's sales losses compared to last year come from there.
In other words, while the PS4 is certainly still selling better than the Switch in Europe, the advantage is getting smaller