MS: Sea of Thieves is Our 'Fastest-Selling First-Party New IP of This Generation' - News

Microsoft and Rare have announced more than two million people have played Sea of Thieves in its first week.

The game is also the company's "fastest-selling first-party new IP of this generation" and the "best-selling Microsoft Studios first-party title on Windows 10." This does not include people playing via Xbox Game Pass, according to Aaron Greenberg. 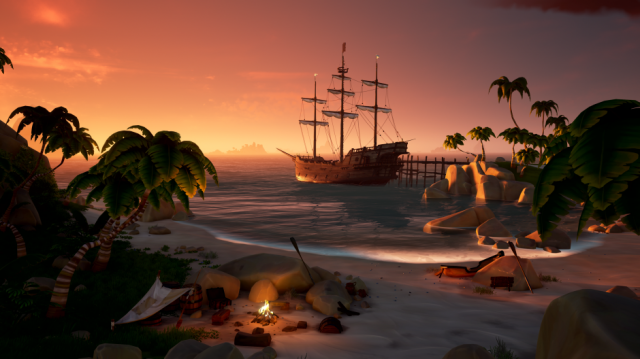 Sea of Thieves is out now for the Xbox One and Windows PC.

For those wondering what titles are considered 1st party, Aaron Greenburg confirmed that MS considers any game published by Microsoft Studios to be 1st party. So, that means it sold more in the first week than Ryse, Sunset Overdrive, Quantum Break, Ori and the Blind Forest, and ReCore. Cuphead is self-published by StudioMDHR through the id@Xbox program, so it's not included.

Thanks a lot for explaining this. You always have to take MS's accomplishments with a grain of salt and carefully analyze them. They like to use fuzzy math and other weird things to make them sound special.

Yeah, Microsoft always tries to use tricky words and phrases in order to make people think that something is what it isn't. Technically they aren't lying, but they're not exactly being honest and transparent. Just look at their E3 last year and all the games they called "exclusives".

Erm i dont know how this is a tricky sneaky thing to claim? Its there fastest selling new IP, how hard is that to grasp?

Ryse, Sunset Overdrive and Quantum Break were all failures in terms of sales (let's not kid ourselves, if it wasn't, sequels would have been in development). Recore, Blind Forest and Cuphead did good though, mainly because they had a much smaller budget and didn't need to sell as much.

But Sea Of thieves cost a lot of money, so it folds into the first category, and will need to sold a lot. We'll see, but I don't see the game having a long life.

@maxleresistant
I'm not gonna say that you're wrong, because you're probably not but as far as I know, we don't know how much SoT cost to make but since dev-time has been quite long I'd assume that makes it expensive.

As for it being a financial success or not. How many bought Game Pass to play it? How many did not return it after buying it in store? Out of the 2 million players, how much did they make? We don't know yet. Your speculation could be correct, it probably is, I'm just trying to add some perspective :P

QB was the previous holder, and it didn't sell well....not surprised 2 years later this did somewhat better.

They said it includes any MS Studios game. So that might actually be Ryse. They sold fairly well as a launch game.

Ryse didn't do that great, QB was the previous holder for "fastest selling new ip".....and we know it struggled out the gate. Fastest selling only means that first week

Imagine all the players who got disappointed 3 hours in.

Sold better than Quantum Break. WOW, WHAT AN ACCOMPLISHMENT!!! I guess early access games are all the rage now.

I know its been a while, but thats a sad indictment of single player games, and only re-enforces MS stance on Gas games rather than SP.

Hey Madword, did you see last year's best-sellers? Super Mario Odyssey, BoTW, Horizon ZD, Crash Trilogy, AC Origins, Resident Evil 7, all in the top 20, and all single-player-only games. Single-player games will sell if they're good. But Quantum Break was not good.

Wonder will we get official sales figures... or just find out how many cannonballs were fired by pirates during launch week? Those all important numbers we love so much.

I love it when they do that. Shuts the industry up. Sales nunbers are not important either. I hope MS continue to avoid giving sales numbers out regardless if it sold good or bad.

Given the competition for this award, not sure it's much an achievement.

For reference, how many first-party new IPs has Microsoft had this generation?

It ain't all that difficult when one can count their new IP's this gen on one hand.

I've seen shifted goal posts before but this... wow.

Glad it sold well. It will encourage MS to invest in exclusives more and also i know a guy that worked on the game and they are really passionate about it:)

"Sea of Thieves is the 'Fastest-Selling First-Party New IP of This Generation' - News" no its fucking not. its the fastest MS first party new IP of this generation. check your facts before you post "news"

Who you calling Pinhead?

"MS: Sea of Thieves is Our 'Fastest-Selling First-Party New IP of This Generation' - News"

Was the title of this article different at some point?

@klamarine it was exactly as I quoted it in my post. It didn't say MS's first party. But all first party games this gen. Which is absurd.

The game will be better in 2 years. But until then... who wants to run Squads on Battle Royal?

MS's best new IP this gen to me is Ori however Sea of Thieves is a great game and it will only get better. Alot in here dont understand its MS's fastest selling IP not the industies. Good on MS and Rare. Great signs. Lets hope the game keeps its momentum until its next major update.

Gald to see the reading skills of Vgchartz user. And Yes I was one of them too xD

The title was "Sea of Thieves is THE 'Fastest-Selling First-Party New IP of This Generation' - News" at some point. And it is not.

Even if that was the case. People on here were bringing up Super Mario Odyssey and Destiny...

Oh damn! I was too late to see it

Fastest selling? The game has barely been out a week and they have concrete numbers already? Okay, well then what are the numbers? Because I DO NOT see this outselling Mario Oddessey or Horizon Zero Dawn.

He said new first party IP, Mario Odyssey is a huge seller but it is not a new IP.

Mario Odyssey is not a new IP, but I doubt Sea of Thieves outsold Horizon ZD.

He also said it is Microsoft's fastest selling first party title of the generation. He's only talking about Microsoft, not Sony and Nintendo.

No idea why people here were trying to say it was a flop.

The game was disappointing to a lot of people, but financially it's silly to say that it's a flop.

Selling more than Ryse, Sunset Overdrive, Quantum Break, Ori, and Recore's first week is an accomplishment. I hope they decide to implement content into the game.

That's honestly not much of an accomplishment. Ryse was not a big seller first week since most people still didn't have an Xbox One. Sunset Overdrive also didn't sell that well, didn't even reach 1.5M lifetime. Quantum Break flopped, sold less than 1M LT. Ori wasn't such a big hit, it was more of a niche game. Not much of a first-week seller but had legs. ReCore was one of the worst first-party flops of this generation.

Well...I guess it depends on what you consider a 'big seller' for a new IP since the start of this gen. Ryse raked in ~266k in its first week (physical-heavy in sales I imagine). So when going by VGChartz numbers (assuming their accuracy), we already have a baseline of what SoT's physical+digital sales are outclassing in that respect.

Good news for this game, deserves every good thing coming for it, best game to come out in years honestly. People say it lacks content, but they lack the basic ability to have fun.

So Destiny and Horizon don't exist?

Yes I misunderstood. But the OP said " for the generation"

Yes, of this generation, for them. Which is why it says "our" and "first-party".