The work of a small group can lead to big things. Take a look at Retro City Rampage, an indie gem built essentially by one man, Brian Provinciano. Or consider Undertale, designed independently over two years by Toby Fox, now a beloved fixture of the indie scene. Then there's Phantom Trigger, a new game brought to life by a team of two: Victor Solodilov and Denis Novikov.  While Phantom Trigger doesn't meet the requirements for a new classic, it's nevertheless an impressive showing for such a small team. There's a lot to like in the game, particularly its combat system. That said, a little more time in the oven could have made Phantom Trigger something special.

Phantom Trigger calls itself a hardcore neon slasher, which means basically that it's a hack 'n slash game with a neon palette. It tells the story of Stan, stricken with a terminal medical condition, and a parallel story of a masked hunter trapped in a neon hellscape. The game's story starts strongly, with Stan collapsing on his kitchen floor and the hunter reaching an alien shore via a sail barge — an allusion, perhaps, to Charon ferrying lost souls across the river Styx. As the story unfolds connections between the everyday, suburban life of Stan and the nightmarish world of the hunter are revealed. 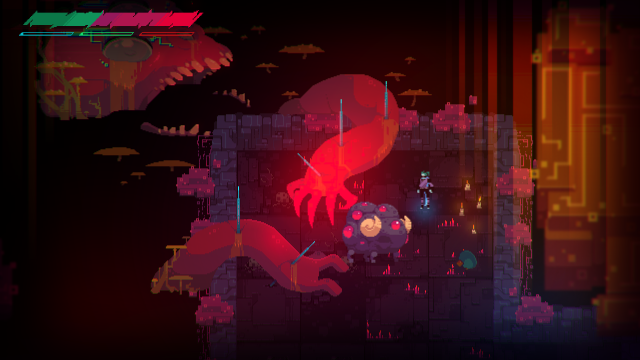 Bringing Phantom Trigger's story to life is some sumptuous pixel art, drenched in neon pinks, greens, and blues. While character and level designs are workmanlike in Stan's world, the pixel work in the hunter's reality is luminous, rich in detail, and swarming with characters both majestic and grotesque. For some game makers, pixel art can be a crutch, something used to obscure a flaw or prop up an otherwise unremarkable game. In Phantom Trigger, however, the art is useful for storytelling and for bringing the game's combat mechanics into sharp focus.

As the hunter delves deeper into neon hell, he'll unleash some neon retribution of his own, in the form of three main attacks. The X button launches his green whip, the Y button his blue sword, and the A button his pink knuckles. Players, controlling the hunter, will need to mix and match these attacks to perform combos and exterminate swarms of deformed monsters. For a short game — Phantom Trigger can be finished in six to eight hours — it has a healthy number of offensive moves and enemy attack patterns. It will keep you alert, and studious. 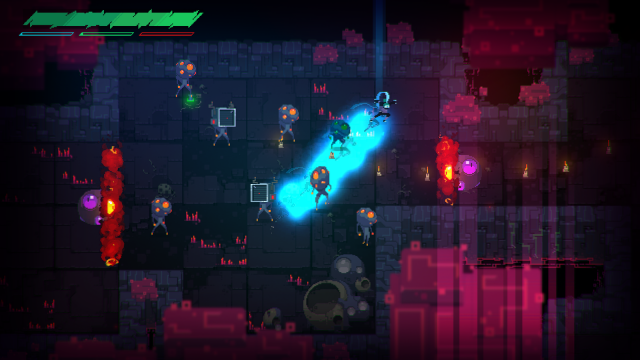 Moreover, the game is paced perfectly — at least until its final act, when it gets bogged down in waves of monster attacks. Until that point, though, the pacing is exemplary. Just as you've mastered a combo or memorized the move set of a monster, Phantom Trigger introduces a new enemy type or unlocks a new three-button combo. The game almost never gets stale and enemies rarely seem recycled.

Something that could have enhanced this push and pull between the hunter and his prey is a more flexible, customizable skill tree. As it stands, players level up each of the hunter's three moves by attacking enemies and finding mirrors hidden across the game's five unique worlds. When a move reaches a new level, a new combo is unlocked automatically. An upgrade system that allows player control over which move is enhanced, and when, would grant Phantom Trigger some much-needed depth and replay value. 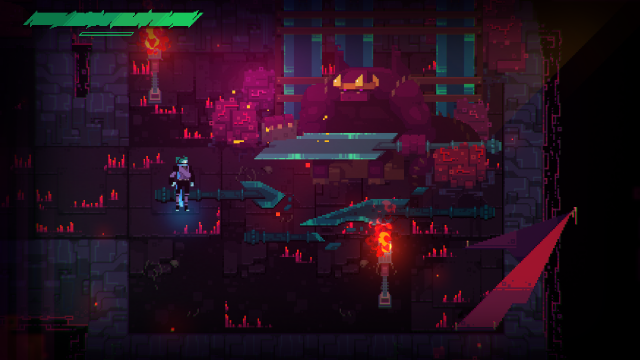 Another area in which the game could benefit from more time in the oven, so to speak, is NPC interaction. There are several interesting, unusual NPCs in Phantom Trigger's hub world, but apart from some cryptic advice and a few fetch quests, they don't offer much of value. Adding more meaningful, consequential interactions between the player character and his motley crew would go a long way.

Even without a long campaign and with only a few, meager RPG elements, Phantom Triggers offers other means to extend the experience. The entire main story can be experienced by two players in local co-op, although the feature is hidden in the pause menu. In addition, there's the Arena, an endurance run populated with enemies, puzzles, and bosses from a given world. 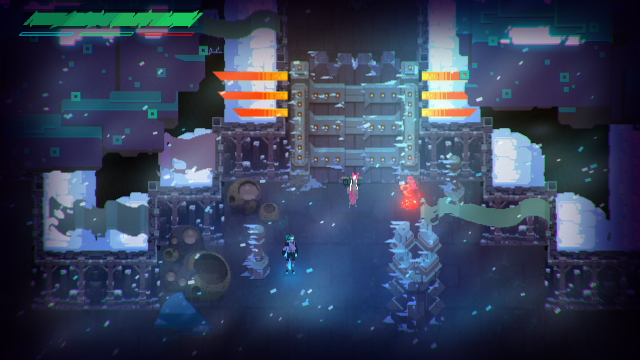 Designed by a team of two, Phantom Trigger represents a strong foundation. The story is mysterious and cerebral, the pixel art evocative and opulent, and the combat system deep and versatile. With a more sophisticated upgrade framework and with more worthwhile RPG elements, it could take the next step towards greatness. For now, it's a passable game with a few missed opportunities.

This review is based on a digital copy of Phantom Trigger for the NS, provided by the publisher.

I thought it was a 3d shooter from the front page. Not interested even if it was good.