I'll be honest - I had no idea Blue Estate even existed until I received an e-mail concerning its imminent release on the PS4 and Xbox One. Blue Estate is an Image Comics IP, described as "a high-octane adrenaline shot of comic violence, violent comedy, tangled alliances, mistaken identities, desperate heroes, ruthless villains and MAXIMUM FIREPOWER," so I couldn't help from popping on some speed metal and punching holes in my walls. Suffice it to say, I was ready for whatever the on-rails shooter had in store for me. 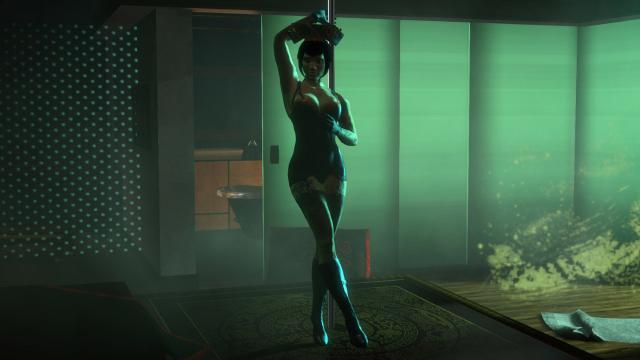 One thing becomes very apparent as soon as you hit the title screen, which is graced by the voluptuous, thong-clad stripper Cherry Popz dancing on a pole - Blue Estate tries entirely too hard to appeal to the "typical" gamer. The plot quickly becomes one of the worst culprits of this, as the story is narrated by an extremely toady looking P.I. displaying equally nerdy tendencies that often make an appearance through his noir-styled storytelling. Not helping the situation are the two bland playable characters - the degenerate son of a mob boss, Tony Luciano, and the hard-as-nails ex-Navy SEAL, Clarence. Tony constantly makes a mess of everything and Clarence must deal with Luciano's underlying incompetence.

With Tony failing as a strip club manager, a mobster, and a son, Clarence is enlisted to clean up his mess, recover Don Luciano's cash from the Chinese mafia, and locate the Don's prized horse, Blue Estate. It's all meant to keep you laughing, but most of it feels entirely too forced. The narration is consistently interrupted by the imaginary Federal Bureau of Procrastination with snarky messages about our balding, bulging, and overall stereotypical geek P.I. Roy Devine Jr, but again, the attempts at humor never quite hit the mark. Making a genuinely funny game is a feat few have accomplished. Blue Estate makes a valiant effort, but when you rely on leg-humping chihuahuas, Kim Jong Il look-a-likes wearing bras, utterly dumb and useless mob underlings, and Tony's hair getting in the way of his murderous rampage, it's hard to generate laughs from anyone other than adolescents. 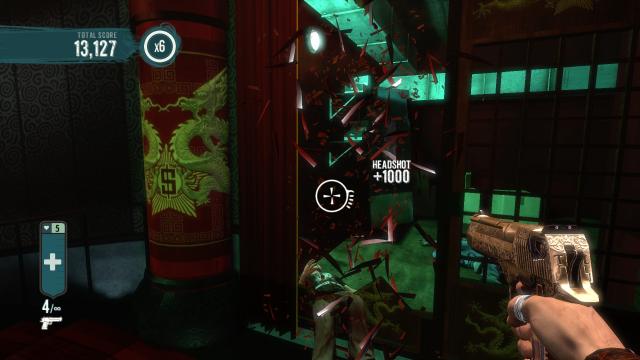 While the story and its comedy falters in reaching a broader audience, the gameplay ultimately succeeds in creating gratifying experience, though it's not without its miscues. As with any on-rails shooter, combat flows along a set path through a first person viewpoint that's evolved from the arcade heyday titles Terminator 2: Judgement Day and Revolution X (Aerosmith), switching to a more traditional FPS view (such progress!). The driving force behind the game is earning points by wasting enemies and performing other actions, with more points granted as the combo counter gets higher for each consecutive kill. It gives Blue Estate even more of an arcade feel, which sits well with the on-rails shooter sub-genre.

To give the feel of having one of those rad guns in your hand like the good 'ol arcade days, Blue Estate utilizes the DualShock 4's gyroscope in order to aim your gun around the screen. It takes a bit getting used to, as centering the reticule will need to be done pretty often to make sure the aiming is at its most precise. Thankfully, it's quickly done by simply pressing the d-pad, allowing for a seamless repositioning. The touch pad is used for melee attacks, as well as interacting with the environment by opening doors, turning cranks, picking up new guns and items, and of course, moving Tony's hair out the field of view. I would say it was gimmicky if it didn't feel quite as shoved down my throat as it does, especially with Tony's hair being down right annoying to deal with. I know developers want to take advantage of all aspects of the hardware, but doing so shouldn't come at the expense of the game's entertainment factor. 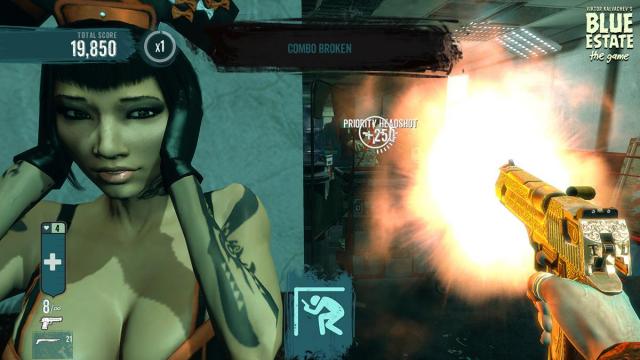 Like the Time Crisis series, there will be opportunities to duck behind cover from enemies where damage is imminent, which is highlighted by a yellow circle that closes in on itself. Killing thugs before they have a chance to shoot will give more points, as will headshots, nutshots, and shooting them right before the circle closes. Taking a page from some old carnival games, situations will arise to help increase your combo number. Often, Tony or Clarence will come across a wall or bar that is just high enough to reveal the upper-third of enemy bodies. Other times you'll have to gun the Chinese mafia down in what resembles a shooting gallery. Taking out targets in the correct order will net you a much larger point bonus, as well as a significant increase to the combo counter. Though a bit whimsical, even when compared to some of the more comedic aspects of the game, this adds an unexpected aspect to gameplay that works great in combination with the game being on-rails. It's not overused and it's a refreshing change from the game's standard pacing, and I found myself wanting more after each one was over.

The weapon list is a standard affair, featuring handguns, shotguns, and assault rifles. Though ammo for the handgun is infinite, the other weapons require Tony and Clarence to find crates to replenish their ammunition. Keeping the combo counter above 20 or so will make ammo appear more frequently, as well as tokens that grant a bullet-time effect that will let Tony score those precious nutshots much more easily. Bullet-time is by no means necessary to progress through each level, as it feels more like fluff, serving as a reward for skilled players that can keep the combo meter up. While the weapons fit the game's setting and overall style, it's hard to shake the lack of inspiration that's attached to them, which bullet-time only exacerbates. With all the attempts at comedy, it would have been welcoming to see the arsenal receive some comedic treatment. Even if it fell flat on its face like most of the humor in the game, at least there would have (hopefully) been some originality in terms of weapon choice. 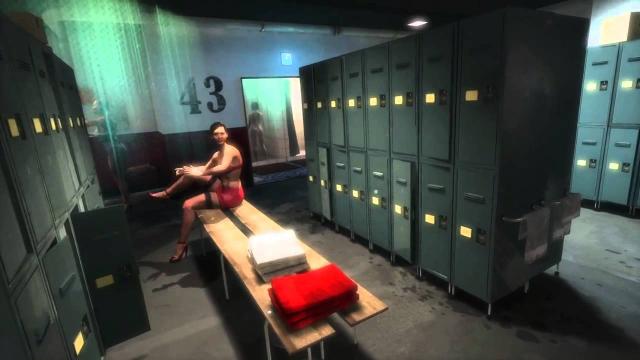 Despite most aspects of Blue Estate being mediocre at best, it's a rather visually pleasing game. Characters hold a distinct comic book style that's brimming with detail befitting of their personalities. Our "loveable" P.I. fits the bill of the greasy, obese, and basement-dwelling nerd, and Tony's look oozes douchiness that's typical of both strip club managers and mafioso Italians, while others are even more stereotypically designed with Cherry Popz's naughty bits jiggling with great realism and the Kim Jong Il look-a-likes are over-the-top ridiculous. Though many of these touches are intended to generate some laughs, which doesn't exactly pan out as intended, it does fit the game's overall style, and stays pretty true to the source material.

Blue Estate features some good gameplay ideas, especially in utilizing the DualShock 4 controller's gyroscope to aim the reticule, which gives the game a very nostalgic, arcade feeling. While it's definitely on the short side, with only seven levels that clock in for a total of around 5 or 6 hours, and relies heavily on the prospect of replaying levels in order to reach a higher score, there's plenty of fun to be had. However, the adolescent themes that permeate through every pore of the game never quite hit their mark and so the experience is significantly lessened. Unless you're a fan of the Blue Estate comic and want to see some new, original stories, it's hard to recommend this on-rails shooter for its full price.

This review is based on a digital copy of Blue Estate for the PS4, provided by the publisher.