Each of the following harbingers of a shoddy game applies to Wreckfest:

It’s remarkable then that Wreckfest has - seven years after it entered development and almost six years after it first became available in Early Access under the working title Next Car Game - finally released on consoles at all, let alone that it’s actually pretty good. 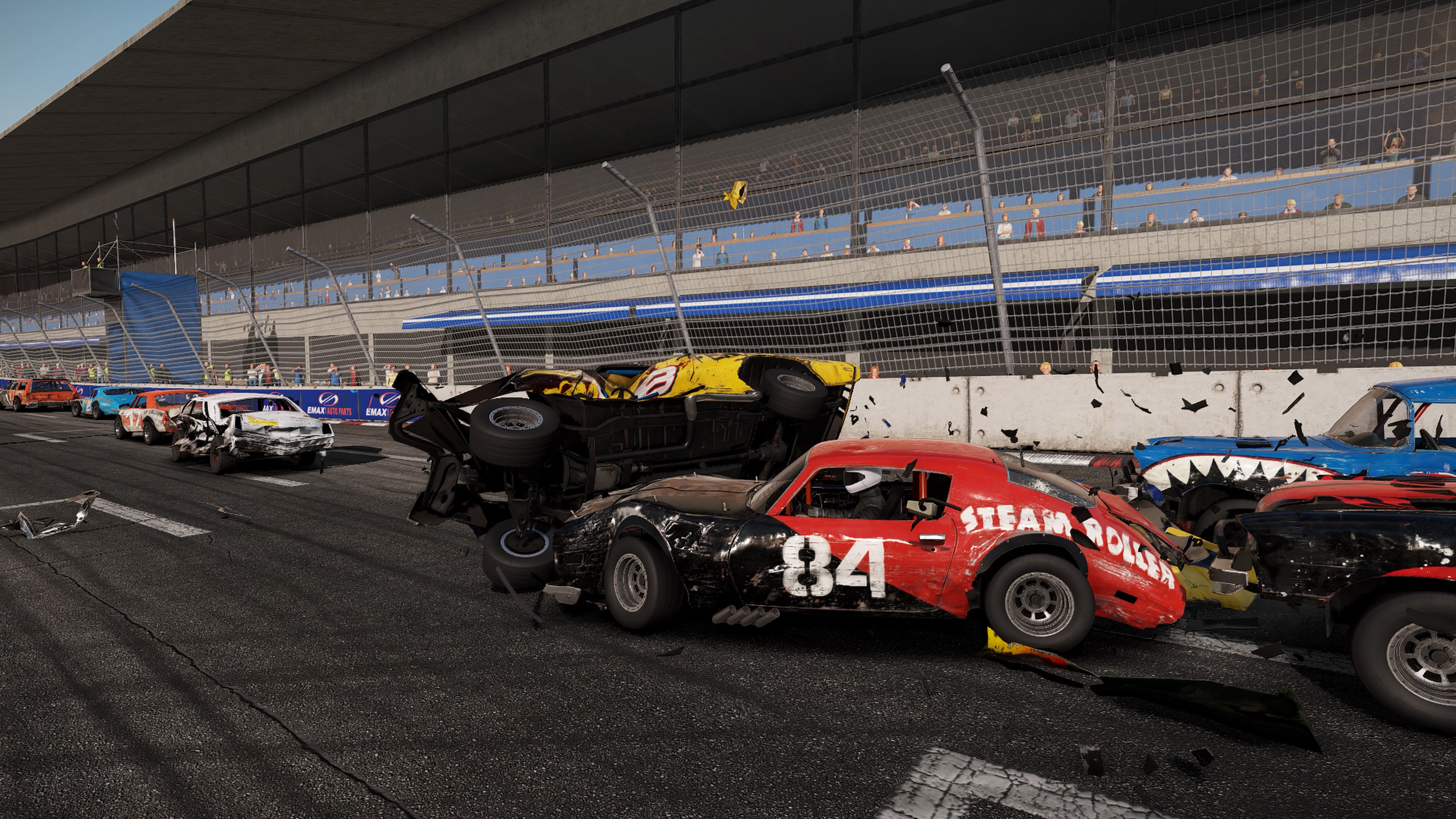 That’s not the fulsome praise I wanted to be able to give to Wreckfest - and I really did want to love the game, incredibly taken as I am by its core concept and the almost salivation-worthy attention to detail that Bugbear has put into the title’s damage physics, modelling, and effects. But it is how I honestly feel about it now, after having played it extensively for the last week and a bit.

At its best it’s an exhilarating, awe-inspiring experience; a delightful smash-up of FlatOut, Destruction Derby, TOCA/GRID, Burnout, and MotorStorm, where racing is only one part of the experience and heavy emphasis is placed on vehicle combat (sans weapons) and survival. In some respects races are quite tactical, especially when they involve 6 or more laps. In those cases debris from other vehicles involved in crashes, carcases from wrecked opponents, as well as tyres, cones and chunks of wood will end up littering the racecourse and act as obstacles you need to avoid lest you damage and ultimately wreck your own vehicle, which will inevitably be the worse for wear as you approach the finish line. 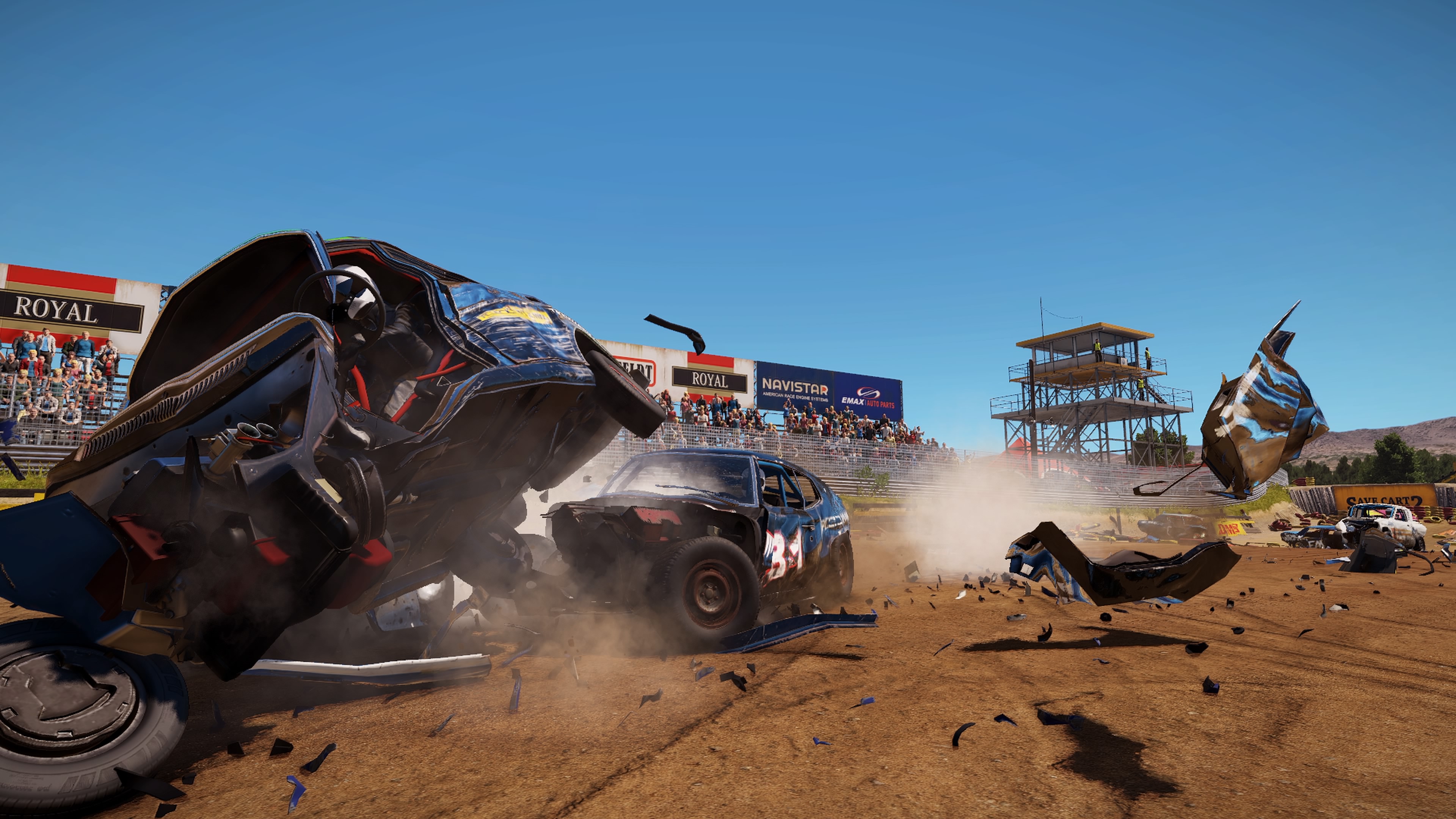 Getting through a race unscathed and winning is virtually impossible, regardless of whether you race in campaign mode against the AI or online against humans, so tempering your own aggression and desire to claw your way to the front of the pack with the need to get across the line in one piece is crucial. That’s not just because both AI and human opponents are aggressive (AI opponents can even be vindictive at times, just like human opponents, and will sometimes go out of their way to ram you into the barriers even if doing so will hurt them and their chances of winning just as much as it does yours), but because most of the game’s 27 tracks double back or cross-over in some manner, often resulting in head-on collisions. Add to that the fact that races contain up to 24 vehicles and it’s easy to see how chaos is the norm not the exception.

This all makes for a great visual spectacle, not least thanks to Bugbear’s game engine, which shows superb attention to detail – those years of development certainly paid off on the graphical front. The carnage wrought by spectacular crashes leaves tracks looking little better than battlefields. Cars become mangled messes, limping on like wounded mechanical animals. Tracks fare little better; tyre barrier walls can be smashed, causing tyres to fly into the air or trundle along the ground; signs and billboards can be burst through, causing splinters of cardboard and wood to scatter everywhere (and on a couple of occasions even get stuck in the hood of my car until eventually dislodged in a corner); the ground becomes torn up in off-road locations, deforming the track; and even parts of the metallic structure of, for example, the home straights can be destroyed. All of this wreckage remains on the track throughout the entire race; no mysterious clean-up duty is performed between laps, thankfully. If EA DICE (of Battlefield fame) made a racing game it’d look something like this.

It would probably play a little bit like this as well. Vehicles are weighty and prone to sliding, and track deformation has a major impact on the gameplay. The AI veers between innovative and rudimentary. On the one hand the fact that the AI can be petty and incredibly aggressive is a faithful recreation of the online sphere. When the AI is involved in a crash with another AI car it feels completely spontaneous, not scripted. Wreckfest delivers on the feel of a (full-on contact) visceral, intense, life-like race.

On the other hand Bugbear has used rubber-banding as a crutch and this really lets the single player experience down. It’s not a subtle rubber-band either; you’ll rarely open up a sizeable lead no matter how well you drive relative to the opposition (this despite there being several challenges to win a race by over 50 metres – good luck doing that in most scenarios without stacking the deck in your favour using various difficulty settings and vehicle upgrades). Even if they, for example, have just been involved in an enormous pile-up that you managed to avoid, the AI will catch up to you in short order and then return to its more normal behaviour. Similarly if you fall behind as a result of a crash or by running off the track you’ll find it far too easy to regain contact with the leading pack. All of this might be acceptable in a kart racer or an old school arcade racer but in modern racing games such blatant rubber-banding feels increasingly lazy, out-dated, and frustrating to play against.

Initially there were signs that the console version wasn’t quite ready for release, even with the extra development time given by the title’s delay. For example, the game would occasionally freeze when loading an event (this has happened to me over a dozen times), loading times were slightly too long for comfort, and the garage menu lagged badly. The title has received regular patches even in the pre-release window that have improved numerous things and since the latest major update I'm yet to encounter the freezing issue (touch wood). The other problems, though they persist, have been improved slightly. Bugbear promises a day one patch to fix most, if not all of these technical issues, but whether they're eliminated entirely of course remains to be seen. 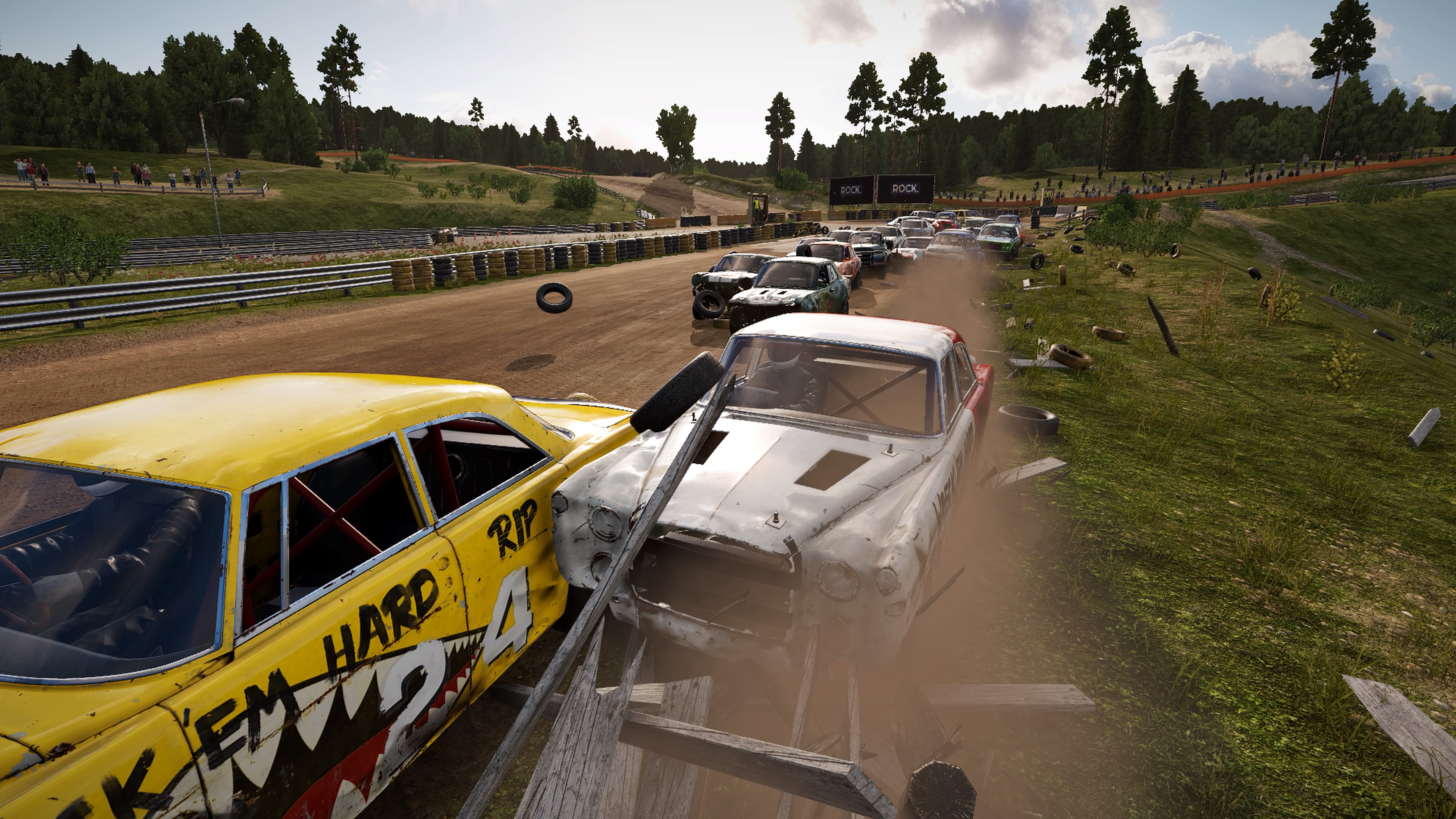 Wreckfest isn’t lacking in content. 24 tracks (most with multiple layouts), 32+ vehicles (including quirky guest ones like the lawnmower, the school bus, and the sofa car), numerous race types ( including demolition derbies, demolition racing, head-to-heads, deathmatches, and elimination races – although strangely the latter doesn’t feature in the campaign, which is a shame), a DiRT-esque campaign, online multiplayer, the ability to create custom races with all sorts of settings, and a photo mode, means there’s plenty to keep you entertained. The only area of the game that feels light on content is the soundtrack – a mix of soft metal, pedestrian rock, and electronic music – which becomes repetitive rather rapidly. 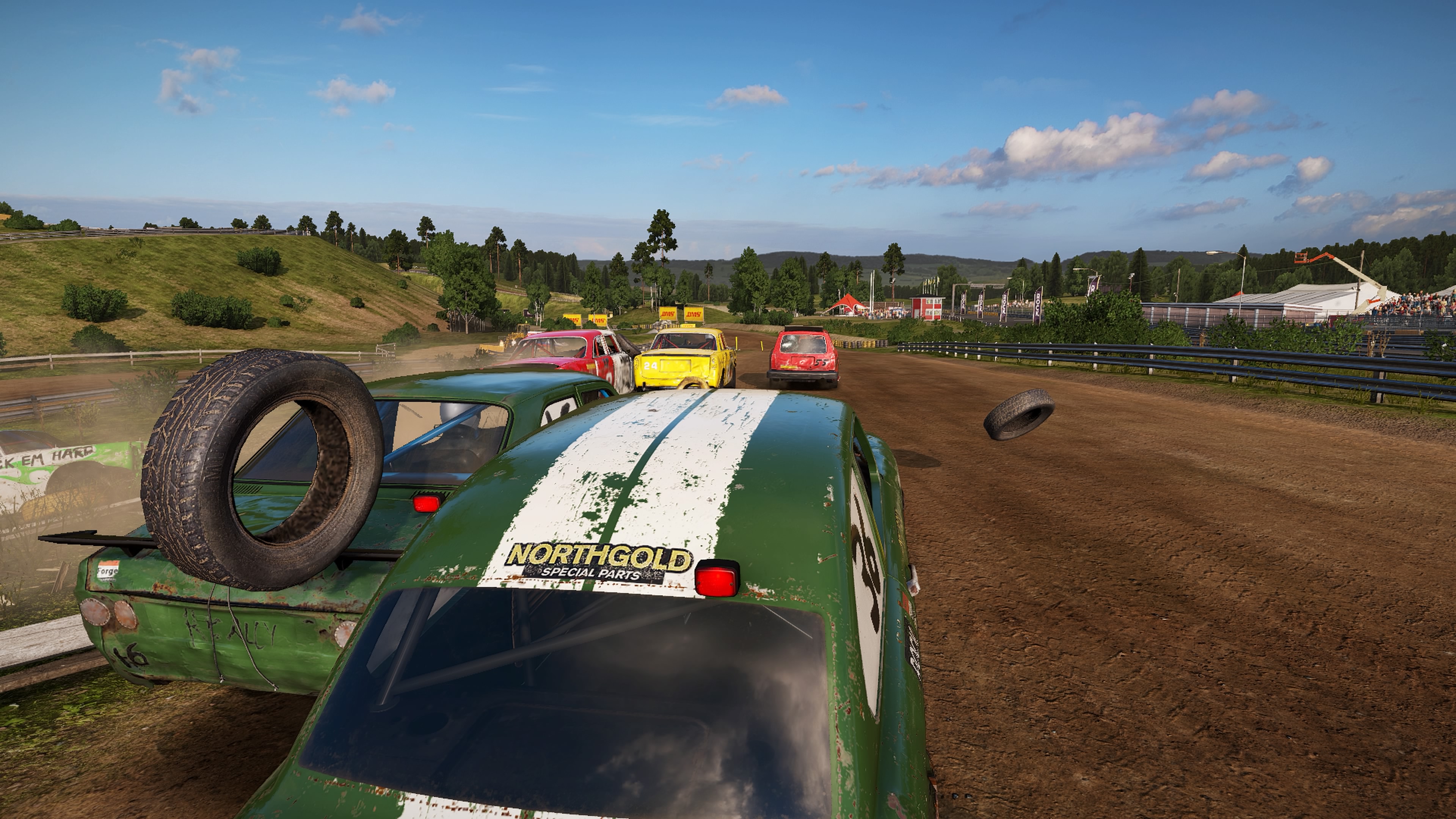 This is the most fun I’ve had with a racing game in years, nonetheless there are just too many weaknesses outside of the game’s USP that frustrate or detract from the fun to give Wreckfest anything like top marks. But anyone who can relate to the thrill of witnessing and narrowly avoiding catastrophically beautiful pile ups between opponents (be they AI or human) in games like GRID, MotorStorm, Burnout, or even Destruction Derby back in the day is guaranteed to have a blast.

This review is based on a digital copy of Wreckfest for the PS4, provided by the publisher.